What Was the Upper Canada Militia? 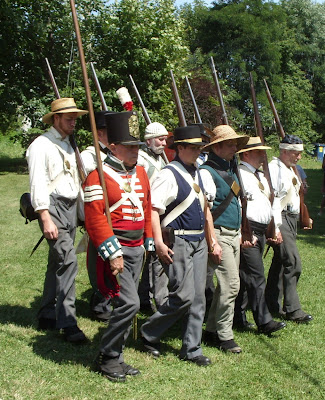 Apart from Brock's trained British soldiers and Tecumseh's native warriors, Upper Canada was also defended by local militia units. These volunteer units were composed of men from 16 to 60 who were local farmers, tradespeople and merchants.

. . . [T]hese citizen soldiers were drilled about three days in a month. They were called up when needed, placed away from the centre of the line, on the flanks (when the line existed at all), and, after an engagement, sent back to their homes and farms until needed once more. *

Although the militia was certainly not intended to be, nor was used as, the first line of defence, a kind of "militia myth" soon developed that the militia was the real saviour of Upper Canada. The British actively encouraged this myth because it was good propaganda, promoted British values over American ones and fostered enthusiasm and loyalty among the citizenry of Upper Canada. After all, the vast majority of the populace were United Empire Loyalists born south of the border, now being expected to fight against former American countrymen. **

The most famous militia units were the York Volunteers who fought with Brock and Tecumseh at the Siege of Detroit and at the Battle of Queenston Heights. York (now Toronto) was the capital of Upper Canada.

Tomorrow: The Battle of Queenston Heights

Pompous British asses. It was no myth. I've been typing up the names of the militia men in the
2nd Lincoln and reading the handwritten notes beside the names. They were heroes.

Americans have always been the biggest threat to world piece...

Now why weren't you my history teacher, Debra!? Good to learn, again, all this history.

I don't remember learning any of this when I was in school. Maybe it was me, or maybe it was the system in the 60s/70s... Probably me.

this is really very interesting!

This is all so educational. I think that it holds much more meaning to me now then when I was back in school.

Also, I like the picture. Let's all put on our straw hats and go to war. :)

I should have had a teacher like you in high school. I would have paid more attention in my Canadian history course. It would have been interesting.

I sorta like the idea that the Canaderian's kicked out asses..not very patriotic of me, but then none of the Americans were from Texas so I can still hold my head up..haha

Being born and raised in the U.S., I know none of this history. Thanks for sharing it.

Well, wait, I did know about the thousands of Loyalists who went to Canada after the rebellion. But other than that...nothing; because I didn't get that from U.S. school history books.

Debra, I am really enjoying all of this history! Thank you! I find Canada is changing, and I am not liking it! I hope it's not to late!