Who Was Sir Isaac Brock? 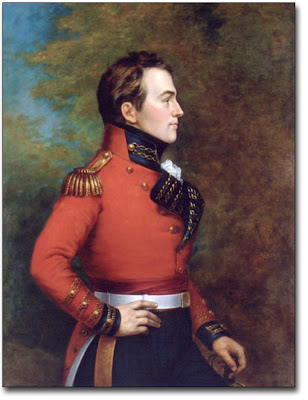 Major-General Sir Isaac Brock commanded all the British troops in Upper Canada (now Ontario) and was Lieutenant-Governor of the province as well. A well-educated and cultivated 42-year-old Englishman, he chafed at his assignment to such a colonial backwater. But he was trained to put Duty above all else and so he did his job well in Canada. He had no use for American democracy and republicanism -- those concepts were "as treasonous in his lexicon as communism will be to a later generation of military authoritarians." *

Brock diligently and meticulously prepared for war and the expected invasion by American troops. He had the great foresight to align his forces with the aboriginal warriors of Tecumseh the Shawnee chief. That turned out to be the smartest and most crucial defensive manoeuvre of the entire war.

By July of 1812, the Americans had already tried to invade Canada at the town of Sandwich (now Windsor) but were successfully repelled. In August, Brock and Tecumseh joined forces and captured Detroit from the Americans. Actually, it was an easy victory because U.S. General William Hull was so terrified of Indians that he went completely to pieces and surrendered Detroit without a fight. Hull was later court-martialed for cowardice but was spared the death penalty because of his previous exemplary service in the Revolutionary War.

Tomorrow: Who Was Tecumseh?

During this period of history, England had my people living in straw huts with dirt floors. Yet they treated your people differently. Saviors in one land, killers in another.

You've done a fine job with the history here Debra and given me much to think about.

i am getting smarter by the day!

those Americans would invade Australia too if it was any closer and richer in oil...

Umm, I'm thinking that if Canada wants Detroit back again, we'd most likely let it go....just a thought. ;-)

Loving the history. I'm learning lots and being refreshed. Thanks!

Debra,
No one is more surprised than me to find that I'm enjoying my Canadian history lessons. I have a Canadian who works with me. I'm going to start quizzing him.

I love learning about Canaderian history...and I think you could pretty much take over Detroit again, probably with a switch and a can opener.

Looking forward to each instalment - it was an fascinating period in our joint histories. Sadly our current government has decided to appropriate it to some sort of propaganda end, I'm honestly not sure what that agenda is about.

I recall climbing Brock's Monument as a child and later as an adult and seeing the plaque to him in his hometown of St Peter's Port in Guernsey.

Excellent! Thanks for the history lesson.

I still think you are trying to tell me something....

Thanks Deb..fascinating..thanks for sharing history..so interesting!
Wishing you a sparkling rest of week
Victoria
PS: hope you had a fab Thanksgiving wkd~

Did you see the recent TV programme on the war? It sad Tecumpseh and Brock admired each other so much it was the first bro-mance!

Love the history lesson! As always, you have interesting topics.

P.S. my blog moved to Wordpress.

Excellent! Thanks for the history lesson! Even though I should remember all of this, sometimes, you forget!

I love these posts. I'm learning my Canadian history all over again that I have long forgotten. Brockville, a beautiful area not too far away from my city, which is named after Brock, is worth a visit. It is Ontario's first incorporated self-governing town, which occured on January 28, 1832.

sunday they are re-enacting Brocks funeral at Niagara on

I eat this stuff up! Thanks Debra, it's always good to be reminded how we got here.

It there anyway for me to borrow that awesome jacket? I might have to smack Gen Hull with the buttons, then I will wear it around town ;-)