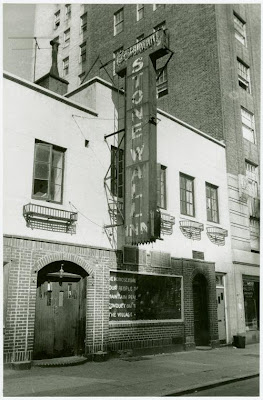 In the early morning hours of June 28, 1969, New York police raided a gay bar located in a seedy hotel called the Stonewall Inn. Police raids and harassment were standard procedure in those days and fear of exposure made gays an easy target. But for whatever reason, this particular raid proved to be the proverbial straw that broke the camel's back. A riot broke out which pitted the police against an angry crowd of white, black and Hispanic gay men, a few butch lesbians, a bunch of queer street kids and assorted drag queens. The police were trapped inside the Stonewall Inn and had to be rescued by the Tactical Police Force. A series of riots occurred over the course of the next couple of days and at their peak involved two or three thousand people.
The Stonewall Riots marked the beginning of the modern GLBT rights movement in the western world. There had been previous, scattered acts of resistance and attempts at political organization, but this incident was the spark that ignited a full-fledged movement.
A year later on this date, the first Gay Pride March was held in New York to commemorate the Stonewall Riots. And since then, the month of June has always marked the celebration of LGBT Pride. It's been 40 years now! Look how far we've come! Imagine how far we will still go! 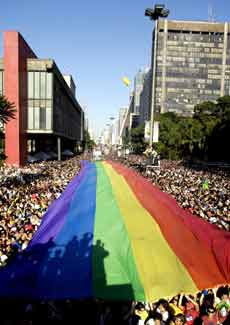 I think the opponents of gay rights are outing themselves to the majority of the country as fearful wing nuts and people are tired of their rhetoric.
It has been a long march, it is not over, but the end is coming.

Hi Celestite -- Yes, I agree with you. And also, thanks for linking to this post. Happy Pride!

Thank you for posting this since I was not aware of these riots and I'm sure others weren't as well.

i think it needs to be stressed more that it's about equal rights, not just gay rights..

I agree, Yellowdog Granny, "equal rights" makes it clear that we just want the same rights as everyone else, not special rights that no one else has.