Nom Nom Nom in The Peg: The Paddlewheel Restaurant 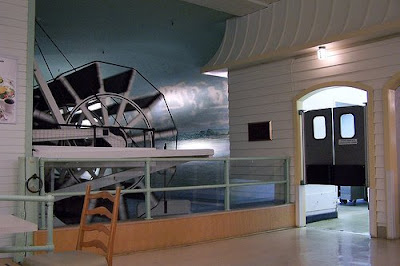 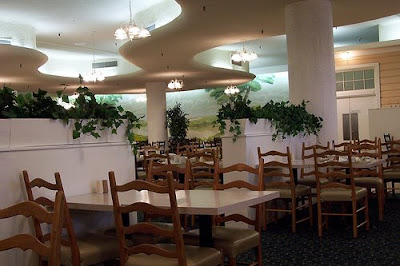 At the corner of Portage Avenue and Memorial Boulevard in Winnipeg sits one of the last remaining Hudson's Bay Company flagship stores in Canada. It is a huge stone building occupying one square city block. And on its sixth floor is found the Grande Dame of Winnipeg eateries -- the Paddlewheel Restaurant. Its decor is meant to evoke the early history of Winnipeg's mercantile past. A simulated paddlewheel steamship takes up an entire wall of the restaurant. Sculpted clouds of paddlewheel steam adorn the ceiling. Other walls are made to look like river scenes and warehouses. Artificial greenery completes the illusion that you are dining outside on the paddlewheel dock. In the restaurant's heyday, the big paddlewheel turned slowly and majestically in its pond of real water.

But the Paddlewheel Restaurant's heyday is long gone now. The Bay serves up its mediocre cafeteria food to only a few customers these days. The big paddlewheel has stopped turning and now rests motionless. The last time I was at the downtown Bay a couple of years ago, the store seemed empty and forlorn. The Hudson's Bay Company is owned by Americans now and its stores have all moved to shopping mall locations. I fear for the continued existence of Winnipeg's flagship.

Recently, the Paddlewheel Restaurant was featured in a movie -- it played the role of a weird and creepy nightspot in Guy Maddin's surreal 2007 film, My Winnipeg. In this revisionist docufantasy, the "Paddlewheel Nightclub" purveyed booze, gambling, salacious Golden Boy Man Pageants and orange jello to the citizens of Winnipeg. A strange, if fitting, homage to this iconic location.