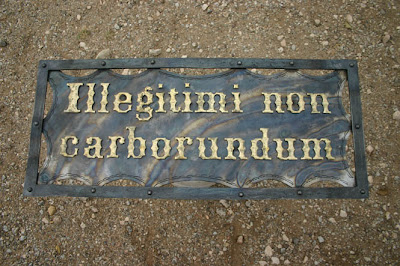 When I was just starting out in my chosen profession, I worked for a man who kept a sign in his office that read Illegitimi Non Carborundum. It was "pretend Latin" for Don't Let the Bastards Grind You Down. Fighting against the bastards of this world was what he specialized in. I wanted to fight bastards too, so I was delighted to be working for him.

He had arrived in Manitoba as a veritable Golden Boy -- highly regarded in progressive circles, full of political and professional promise. The tarnish set in over the years, as he disappointed some people, used others, became known as a bit of a bastard himself. It also became apparent that he was an alcoholic, albeit a highly functioning one.
Eventually he was a bastard to me too and our professional paths parted. For the next decade or so he carried on as before, fighting his battles, acquiring and discarding girlfriends, having a couple of kids, enjoying the status symbols of his success.
Then I started to hear disquieting rumours (even in Alberta where I now lived). He was unreliable in dealing with his partners and clients, mean to his staff, erratic in his personal behaviour. He couldn't seem to hold things together.
Posted by Debra She Who Seeks at 07:30

Labels: Down Memory Lane, My Winnipeg

fighting bastards is a great cause, but as this man learned, it can be a fine line between fighting them and becoming them.