Values on the Goddess Path, Part 1 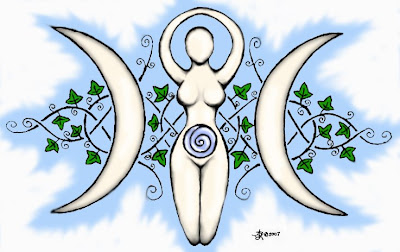 I am old enough that my basic socialization occurred in pre-feminist times. It took me years of struggle to unlearn the awful lies that were taught to me as a child and adolescent. Lies of male superiority, female inferiority, our "proper roles," what we girls should and should not do, expect and not expect. Lies that society enforced by abuse and even violence if disobeyed. Lies that were created and sanctioned by God Himself.
The greatest and most fundamental lie, the lie which made all the others possible, was that only male imagery could possibly represent the Divine. It was the ultimate form of exclusion -- the world's Central Truth bears no resemblance to YOU but instead shares ALL the characteristics of the Dominant Group. It was forced colonialism of our souls, really.
So for me, the single greatest value of the Goddess Path is its central use of female imagery to characterize the Divine Mystery of Existence. Goddess spirituality affirms the inherent sacredness of women's lives, bodies and experience. It does so in a way that is direct, unmediated and unapologetic. Women are entitled to relate to the Divine Feminine with no sense of "otherness."
The imagery of Goddess spirituality is a cool and soothing balm for my soul. I never tire of it.

I'm lucky that I wasn't brought up in a God-fearing (or God-loving) environment, so wasn't force fed this macho crap. It makes so much sense that there is a devine feminine as well as a divine masculine - I really can't understand those who think otherwise! Let's hear it for the Goddess! Woot!

Word! that's exactly why Goddess worship fits so well for me. I was raised in a horribly patriarchal family and it is balm for my soul.