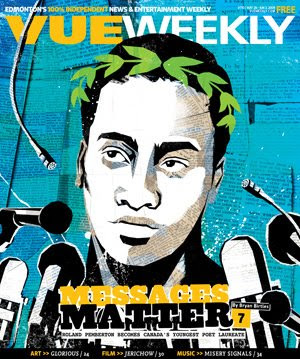 It's not just Great Britain that has a Poet Laureate, you know. The City of Edmonton has one too. Our PL gets appointed for a two-year term and is expected during that time to produce a few poems about our City and preside over the City's annual Poetry Festival.
Our first PL was Alice Major, whose latest book of poems is a fun retelling of the Canterbury Tales set in a modern Edmonton office tower. For City Council, she wrote a delightful poem about potholes (which are a big deal in Edmonton, believe me). Our second PL was E.D. (Ted) Blodgett who is a professor emeritus of comparative literature at the University of Alberta and a two-time winner of the Governor General's Award for Poetry. For the City, he wrote some lovely poems praising a particular city park, which will be permanently displayed there on plaques.

Our third PL has just been appointed and he is an inspired choice. City Council chose a young local rapper, Roland Pemberton, whose stage name is Cadence Weapon. According to the Edmonton Journal, he is (at 23 years of age) "one of the hot young turks of Canada's hip-hop scene." The appointment's been getting a lot of press right across Canada. Everyone's very enthusiastic about our new PL and why shouldn't they be? What better way to acknowledge how poetry is expressed by the next generation and how poetry is still very relevant to everyone's experience? He will encourage people to think about poetry -- and Edmonton too -- in a fresh new way!
I wish all of City Council's decisions were this good!
[Illustration of Cadence Weapon by Pete Nguyen of Vue Weekly]
Posted by Debra She Who Seeks at 06:42