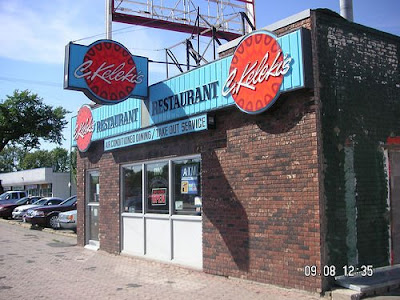 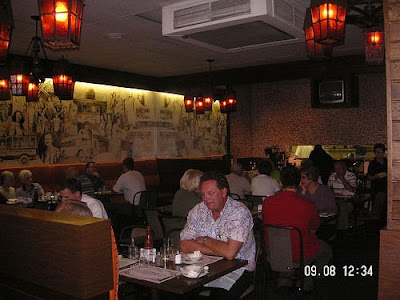 The fabled North End of Winnipeg is home to a couple of my favourite restaurants, one of which is the Kelekis Restaurant on Main Street. I've had many a cheese dog there, accompanied by their famous shoestring fries. Mmmmmm, cheese dog and fries . . . .
The Kelekis family represents a classic immigrant success story. They started off with a simple hotdog and chips wagon and eventually built it into an established restaurant where "everybody who is anybody" came to eat. The restaurant itself is nothing fancy -- it was probably last renovated in the 70s and looks its age. There's counter service in the front and table service in the back. Those two areas are separated by a huge map of the world with pins in it showing where all their customers have come from. One wall is taken up with a large mural illustrating the Kelekis family saga. Another wall is covered with framed autographed photos of all the Winnipeg, Canadian and American celebrities who have eaten in the restaurant over the years. Back in the day, any performer who came through Winnipeg on a concert tour went to eat at Kelekis Restaurant afterwards because, in those days, it was the only restaurant that stayed open into the wee hours. Things are different now, of course.