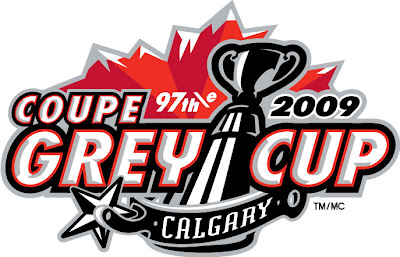 I only watch one football game per year -- the Grey Cup championship of the Canadian Football League (CFL). Okay, so sue me -- I'm not the most dedicated sports fan in the Great White North. But I have watched every Grey Cup game since I was a little girl -- probably at least *cough* 45 *cough* games by now. Hey, I personally remember watching the mud bowl, the fog bowl and the snow bowl too. I know the CFL rules and I actually do understand the down system, thanks to my Mom who taught me.

So Sunday was the 2009 Big Game, which was held in Calgary. As a loyal Westerner, I was of course cheering for the Saskatchewan Roughriders. They started off strong and led in the first half, but the Montreal Alouettes fought back. With about 10 seconds left in the game, it was Saskatchewan 27 and Montreal 25. Then Saskatchewan was assessed a 10-yard penalty for inadvertently having an extra player on the field and that put Montreal close enough to score a field goal.

So poor Saskatchewan snatched defeat from the jaws of victory, as they say, and Montreal stole the Grey Cup away from the West. Oh, the pain of it all!

But just wait until next year! The West shall rise again! 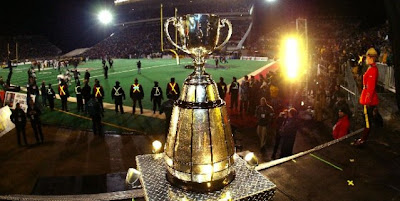 I'm not a big sports watcher either, but boy I was pulling for those Sask. boys! Sigh - maybe next year.

I know nothing about football. I am a baseball fanatic...even to wearing the rally cap in front of my television. And, I am not a Yankee fan. The other New York team is who I root for.
Mary

I saw the crazy way that ended on Sportscenter.

You watch one more game a year than I do:) There's something about testosterone-laden sports that is just so foreign to me...

Anyway, I'm just starting to look back through your posts, and I like what I'm reading:) Wanted to let you know I stopped by:)

By the way - I despise camping too. My idea of roughing it is going to a hotel that doesn't offer room service:)

LOL, I am a football widow. Wait, make that a basketball widow. Oh, wait, a world series widow. Oh, heck, he watches every sport even if he doesn't really like it. I will watch the biggies like you, when it comes down to the wire. Because If I didn't, when the hell would we see each other? Okay that's an exaggeration. But really. Can one man love every sport? Is that even healthy?

i've only seen about 3 canadian football games..(not shown in usa or at least in texas) but I used to have a list of all the canadain rules .length and width of field..etc...sorry your team lost..there's always next year..