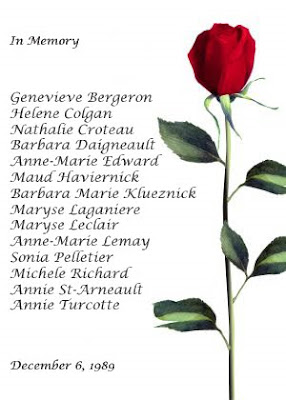 Although it seems to me like it only happened recently, 20 years have now in fact passed since December 6, 1989 when a crazed anti-feminist gunman killed 14 young women at L'Ecole Polytechnique de Montreal. I remember how, in the aftermath of that murderous rampage, many women across Canada wore red buttons emblazoned with a single word, Feminist, to show that the movement for women's equality cannot be stopped by fear or intimidation. In the early years, the annual December 6th Vigils focused exclusively on the women of the Montreal Massacre, but eventually the Vigils became a broader forum for remembering all women who suffer violence or death due to gender. In Canada, December 6 is now the National Day of Remembrance and Action on Violence Against Women.
Posted by Debra She Who Seeks at 07:00

Labels: I Am Woman Hear Me Roar, O Canada

Oh, how awful!!! Too much of this violence in our world. I will light a candle and say a prayer.
Mary

I come from Montreal> I was there that day. Anne-Marie Edward was a friend of my younger son. She lived a couple of blocks over. They were in college together, were both on the Executive of the Kayak Club and went winter camping together. The next year he was registering at university and another gunman came in, a faculty member, and he shot and killed five of his colleagues on the floor below. My son is now a professor. And the government is repealing the gun registry!

that is the saddest story. I had forgotten it till I read about it in my DAM News this morning..Goddess bless them.

Lighting a candle with you...