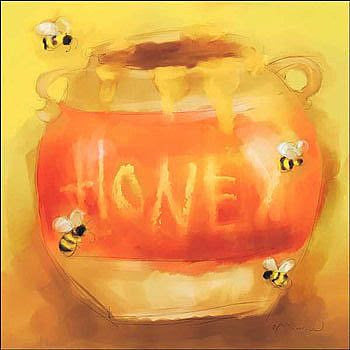 Being a child of the 1950s, I was named for Debbie Reynolds, the wholesome girl-next-door actress whose husband Eddie Fisher was stolen by that evil temptress Elizabeth Taylor. (For younger readers of this blog, think of Jennifer Aniston whose husband Brad Pitt was stolen by Angelina Jolie). Pop culture being what it was, there were a lot of Debbies in my age group.

I learned from books that "Debra" is a Hebrew name that means "honeybee." Well, isn't that odd, I thought.

I also knew there was a famous Deborah in the Old Testament. She was a warrior and a judge of Ancient Israel. Well, isn't that odd, I thought.

It wasn't until I was on the Goddess Path that I learned the full significance of those facts. What I learned taught me that my name profoundly honours the Goddess. It connects me to Her in such a way that no new spiritual name could improve on the given name that I already have. I'll explain more in my next two posts.
Posted by Debra She Who Seeks at 06:01

What a great story! Now I understand the significance of your header. I remember the Eddie, Debbie, and Elizabeth triangle. What a tragedy in those days! Today, stuff like that is everyday news.

I love the meaning of our names. My name means "Resurrection" and I can't think of a better "spiritual" name.

looking forward to your next posts.

~thank you for sharing your journey...fascinating and if i may...i love "one who seeks" & can't wait to hear more...brightest blessings~

Debra She Who Seeks. Hmmm seems appropriate for a Judge. She who seeks wisdom, change, justice. I think its absolutely perfect for you. I believe in destiny and a name speaks for itself.

I am looking forward to hearing more.
xoxo

I believe that a person 'grows' into the name given them at birth. So I have always warned my kids to be careful what they name their kids!

And you are a sweet, wonderful, yet strong woman. Very fitting of the name given to you.

I look forward to hearing more. :)

cant wait for more.. a lot of girls were named Tammy too for the movie debbie made called tammy.

Its great that you know all the aspects of your name. I am also named after a favorite child book hero of the time I was born..