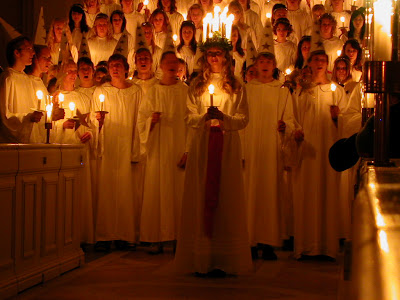 Sankta Lucia is the Scandinavian Goddess of the Winter Solstice. After the longest night of the year, She brings back the light to illuminate the darkness so that Her people will have sunshine, food, warmth and survival. Her very name means "Sacred Light." When Europe was Christianized, the Goddess went "undercover" as a saint, but Her Feast Day remained on the Winter Solstice and Her rituals continued unchanged. However, when Renaissance Europe switched from the Julian to the Gregorian calendar, several days were lost in the conversion and Her Feast Day ended up being on December 13.

So ends the longest night
With light that She's bringing.
She is the Queen of Light
Joyfully singing!
Clad in Her garment white,
Wearing Her crown of light --
Sankta Lucia! Sankta Lucia!

In the Procession of Light, Sankta Lucia is accompanied by many candle-bearing attendants -- Maidens in white dresses and Star Boys in conical star-studded hats. All celebrate the return of the light in this beautiful and ancient ceremony.

I have always loved this ceremony...so beautiful with the light. And I so love the meaning behind it... Gorgeous photo!

sorry it took so long for me to comment on this post. Geez I am behind on my reading, I normally like to catch the news hot off the press, but were into the 12 daze of Yule and you know how that is, busy, busy, busy!

Anyways I like this post as I have been doing lots of reading on the Norse Yule and the Origen of Santa Claus. I like the idea of Odin Morphing into our modern version of the Jolly old elf or Viking?

Yes Sankta Lucia goes right along with my studies, thanks again.

Debra, I always learn something new and fascinating in your posts. This is no exception. Interesting that the return of the light is celebrated on one of the shortest days of the year, huh? In the middle of winter. But in Scandanvia, maybe that is the end of the long night. Like in Alaska. Now THAT'S something to look forward to.
xoxox B

I loved taking part in this ceremony when I was young. We had to learn songs in Swedish! I always wanted to grow up to be the girl with the crown of candles.