My Spiritual Name: The Bee Goddess 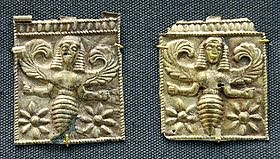 Bees have been sacred to the Divine Feminine for thousands of years in ancient civilizations from Babylon to Rome. Virtually all bees are female and they serve a single Queen Bee. Only bees can perform the transformative magic of turning pollen into honey. In ancient times, honey was the only sweetener available. It was also a powerful and much valued preservative. Honey was accordingly seen as one of the most precious gifts of the Goddess.

In Classical Greece, many Goddesses such as Rhea, Artemis, Cybele and Demeter were characterized as Bee Goddesses (among their other attributes). Their priestesses were called "melissae," which is Greek for "honeybees," because they served the Bee Goddess. At the temple of Artemis in Ephesus, the Goddess was also served by castrated priests called "essenes," which is Greek for "drones" (male bees).

"Melissa," a name still popularly given to girls, means "honeybee" and connotes "priestess of the Goddess." The equivalent Hebrew name, "Debra," means the same thing.

I love this. Thanks for sharing these meanings with us. Love the honeybee meaning.
Mary

Wonderful! I've always thought of honeybees as being magical. What a gift to be named after them!

I really enjoy hearing about the meanings of names. I know a few Melissas too.

I am Judith - which only means "a woman of Judea" but in the Deuterocanonical scriptures I am the one who seduced Holofrenes and then as he lay exhausted in his tent following unmentionable sexual activity, I cut off his head with his own sword. Putting his head in a basket my maid and I sneaked back to the Jewish camp, where they celebrated, and I became the heroine of the day. You can read it all in the "Book of Judith".

How cool is that...I see why you wanted a flower with a bee on it! You are a goddess!

I love the medals or symbols. Those are totally cool.

Bees are a blessing.

I learned about the name "Melissa" when we used to watch The X-Files, which had some mythology in the story that had to do with bees, and Scully's sister's name was "Melissa". I always wondered if that was intentional. I think it was.

the story doesn't end here however. in the Christian religion Mary is often associated with the bee, an attribute obviously borrowed from her pagan forbears - and so this ancient tradition lives on, for those who have eyes to see, ears to hear, and minds clear enough to perceive the divine reflection.

my name is Moumita , an Indian name which also means honeybee.. just thought of sharing :)

Last night i dreamt of a very light golden-yellow Bee which landed on my hand, i felt very blessed - this morning i am minded to share the Bee Myth;
https://www.youtube.com/watch?v=CsVL22dIdKw
Blessed Bee ~

Very cool video, Celestial Elf -- thanks for sending it to me!