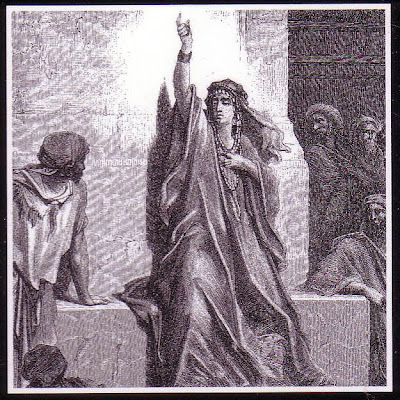 The books of the Old Testament reflect many different historical eras in the life of the Jewish people. Scholars now recognize that the Old Testament contains evidence of Jewish spiritual beliefs which predate, or competed with, their belief in Jehovah, the male God of monotheism. Traces remain both of Jewish polytheism and of Jewish belief in the Divine Feminine. These traces, apparent in the original Hebrew language, are more obscured in the English translations.

One such trace is found in the figure of Deborah in the Book of Judges, Chapters 4 and 5. Once again, the Jewish people were in bondage for having done "evil in the sight of the Lord" -- meaning they'd been worshipping other deities again. (There was a lot of wavering back and forth by Jews in the Old Testament). Scholars now think that Deborah's name (Honeybee) was not her personal name, but a title meaning (as we have seen) Priestess of the Goddess. In that capacity, she was the leader of her people, a role that was not possible for a woman under patriarchal monotheism. So this story must actually have its origins in an era when Jews honoured the Divine Feminine. (In a later period, references to the Lord God were added to make the story conform to monotheism).

In her capacity as a Deborah, this female leader acted as a prophetess, a warrior and a judge or final settler of disputes. She led her people to freedom from their oppressor. The Victory Song of Deborah features prominently in the Old Testament text.

~and there you stand...you truely are a seeker...love the knowledge you have found...from honeybees to a settler of disputes...thank you for sharing your name with us. brightest blessings~

Wow, super powerful! How wonderful you were named after her. Beautiful.

Wow! What a history your name has - beautiful.

My name 'Corey' is gaelic and means "hollow or hole". (Could be a reference to my often empty head.

Powerful story. Powerful woman. Thanks for sharing this with us.
Mary

I love history and I am loving these little lessons.

strong name for a strong woman........Deb, I would like you to have access to my private blog, but need your email address.
mine is lisaballico@hotmail.com
if you are interested, just email me and i will get and inviation to you

another example of women being written out of the bible because we are the more powerful sex, LOL!

i love all the information im gleaning from you here..