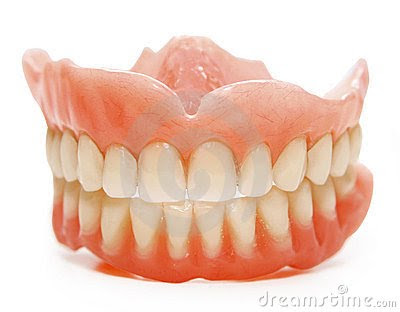 You have to understand that Moochie and his wife had no teeth. Oh, they each had a set of false teeth but, as explained to us, those were "welfare teeth" and so didn't fit right. Rather than hurt their gums by actually wearing the teeth, the Moochies simply carried them around in a brown paper bag stashed on the ledge of the car's rear window.
When supper was ready to be served, Moochie said to one of the kids "Go get our teeth" and the kid obediently ran out to the car to fetch the Big Bag o' Teeth. Moochie and the wife fished around in the bag, figured out whose uppers and lowers were whose, shoved them in their mouths, gobbled down their meals and then promptly took the teeth out again. Back in the bag for next time!
Nice.
Tomorrow: As The World Turns
Posted by Debra She Who Seeks at 05:31

i hope they at least brushed them at some point....yuck!

oh that was deliciously gross for early on a Wednesday morning!

oh my gosh thats funny,, is that true?Please say its not true!!

Is this the tooth, er...truth?

Yes, everyone, this is the honest-to-Gawd truth.

I soooooo didn't need to hear this story and to see this picture, Debra, you naughty devil!

I don't want to hear any more! That sounds really gross!

So wrong on so many levels!

You've just achieved the art of making something gross, funny! It is a fine line to balance without it quickly falling into the pit of churning stomachs, but you danced through it with ease!

Thanks for the entertaining story, providing lots of smiles, and just a touch of "ewwwww" (and yes, I agree with Joyce. .I hope that at some point, they brushed those choppers. .but from what you've shared so far, I don't have high hopes. .which is a bigger EWWWWWWW!)

Gee, a memory of my great uncle, a WW1 vet just surfaced. He used to look at me across the dinner table when I was about 6 and push his bottom teeth half way out of his mouth to make me laugh.

Around in a paper bag? That seems quite gross.

It just gets weirder and weirder. Gum the gumbo kids?

I'm growing awfully fond of Moochie and gang. Everyone needs relatives like this; they are very entertaining, and provide material for great family stories.

That is bizarrely hilarious!

My grandpa used to take his dentures out after eating and lick them.