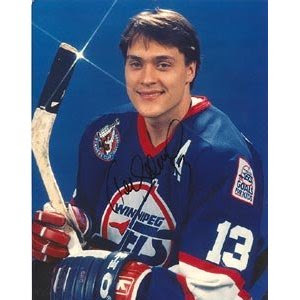 While we're on the topic of the Winnipeg Jets, just thought I'd mention that Teemu Selänne was always my favourite Jet. The Finnish Flash was an outstanding player, winning the Calder Trophy for best rookie of 1992. And he's gone on to achieve all kinds of records in his almost 20-year career since then. Plus he won the Stanley Cup with the Anaheim Ducks in 2007. No player has deserved it more, in my opinion.
But the reason he was my favourite Jet is that he was (and, I'm sure, still is) a Class Act of the absolute first order. He did an awful lot of charity work in Winnipeg and always looked genuinely pleased to do it. He was especially great interacting with kids, friendly and involved.

Teemu Selänne is one of the players featured in this great clip about what it feels like to win the Stanley Cup. Hockey players tend not to be terribly articulate at the best of times, but winning the Stanley Cup is so overwhelming that there are "no words" to describe it. That's Teemu at 0:19 of the clip, manfully holding back the tears and tugging at his hat. That says it all.

It is always enlightening to learn that someone that you admire in the public eye, whether a sports figure, or a celebrity, is a good person beyond the limelight.

Thanks for sharing this story, I never knew of him before, but it warms my heart to learn of not only his talent, but his compassion.

it's so nice when celebs use their fame for charity work, wish we had more such stars.

Great blog. Great guy. Just what I needed to read this morning. Thanks Debra.

I remember the year he played for the Colorado Avalanche (my Fav Hockey team - next to Vancouver). He was such a gentleman. While I enjoy the scuffles at the hockey games, I truly appreciate the good athletes who are also good role models.

Awwwwwww now that is cute. I don't follow sports though. What is it they do with that big stick? LOL!

just stopping in to say Hello today, my friend

So good to hear that someone on top can be inspirational.

That's what I love about the smaller market teams - the guys that do the extra get the recognition they deserve because the whole city knows what they are doing and every one appreciates them!

i love that he uses his fame for good, what a sweet man :)

"What about Mark Messier?" Says the NYer that doesn't know much about hockey.

BTW...made you new blog of the day.

That video is legit. I love your blog!

Loved Teemu, one of my favorite hockey players of all time. Right up there with Fleury.

This fella is one of the good guys. Good to see the softer side of hockey.
Debra, you are one of a kind.....your knowledge is so diverse that I always look forward to your posts.

Nice to know there are a few good men left in pro sports. Most of them are hockey players. I say this because my husband is a sports writer, and that's his opinion.