Another couple of my older female relatives also had somewhat unusual names -- at least, unusual for their time and place. One was named "Beryl" which is a family of crystal gemstones. Beryl comes in several colours like pink, green, yellow and clear. Types of beryl include emerald, aquamarine, heliodor and morganite.

It's a very pretty name if pronounced properly as "BARE-ill." But everyone called her "BURL" which robbed her name of any musicality whatsoever.
Another aunt from my ultra-WASP family was inexplicably given the Spanish name of "Inez." Where her parents out in the middle of nowhere on the Canadian prairies ever learned that name is a complete mystery. 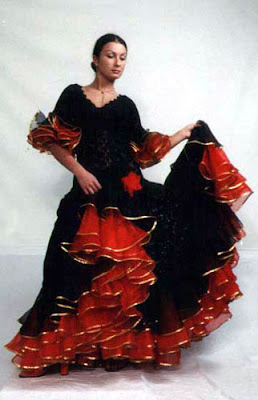 Again, pronounced properly, it is a beautiful and melodious name: "ee-NEZ." But of course everyone anglicized it and reduced it to the considerably less tuneful "EYE-ness." Matching her Spanish given name first with English and then Irish surnames, my auntie was a pioneer of Canadian multiculturalism in action!
Posted by Debra She Who Seeks at 05:33

Anonymous said...
This comment has been removed by the author.
Friday, July 22, 2011

I have heard the name Beryl referenced in many family histories here in the States. There seemed to have been a time when the names of gemstones were commonly used in naming babies.
Interesting about your Aunt's name....

My great grandmother who lived on a farm turn of the century was Rosella Arvella. She named her daughter Ella Agnes Ruth. I got stuck with Lois. Sigh.

I came across many unusual names while I was teaching. One girl had the number 7 stuck in the middle of her name. It wasn't pronounced, it was just there.

My blog name is Cameron...which is one of my Grandmother's names. My other name, Hannah, is the other grandmother's name. They were both AMAZING women, and I am honored to be named after them! Interestingly enough, the name Cameron is a masculine name (Scottish surname) that is used now equally for boys and girls. Given I am transgender, I have a built in male name, which I am pretty sure is not something my sweet, religious family was considering when they named me so, but turned out very cool!

we have the name Ines in my country too :)

In doing genealogy, I've discovered how important names can be...especially naming a child after a parent. For example, my 5th great grandparents wanted to name a daughter after the matriarch so badly that they had four girls they named Martha within a short span of time who died and eventually the 5th Martha lived and carried on the name.
Mary

My Granmothers name was Laticia. I don't know where that one came from either. going to read your two last posts. this is interesting, have a great weekend, don't get rained on.

i love going to mexico and telling everybody my name is susanna, (sp. pro)...it is so much nicer than plain, old susan....my husband always gets a chuckle out of it....what's in a name? lots!...best, susanna

great post,, makes you wonder where some of the names come from doesn't it,,

I really like the name Beryl. Too bad people don't pronounce it properly; it's such a lovely sounding name.

I agree with you.....aren't names intriguing? My name, Josette, was chosen after a French maid who lived with my parents during the war. I have always gone by Jo because people would always just ruin my name when trying to say it. Now....I kinda' like my name as I've gotten much older......It speaks volumes of who I really am!!

* No offense to anyone named Christine (it is actually a lovely name)....the meaning of the name just does not suit me. :)

I love those names..very lovely..rolls off the tongue nicely..my great grandmothers name was Darenda Shawnee Missouri Sue, Arkansas Banister. I got the Sue..thank the Goddess..

You are so right about the pronunciation of words. I'm often struck by how beautiful a name sounds in French, but the anglicized version leaves lots to be desired.

Those had to be pretty tough names to grow up with. Pronunciation wise I mean. Spelled one way...pronounced another meant that every time someone saw the name and pronounced it wrong these girls would have to correct them. It seems unique names are in vogue once again though.

Great names, I've always liked Beryl. My grandmother was a Florida, and except for my father's name Osborne, the rest of us just have your regular garden-variety names.

"Beryl" is gorgeous! It reminds me of Meryl as in Meryl Streep and I can't imagine anyone calling her "Murl." ; )

I love your series on names! I've had my nose in the old genealogy book recently, and boy... sometimes I wonder "what were they thinking?" I have an Aunt Inez, pronounced "EYE-ness"

Such neat names! They really gave your relatives individuality! Naming is such a huge responsibility, and I really think someone's life can be really messed up if their parents name them wrong!

If anyone called me Burl, I'd take it as a sign from the universe that I needed a legal name change! Poor thing! I'd love something as exotic as Inez though. Beautiful!

Beryl...this name reminds me of my university years 'cos I had a friend with that name. The one and only time I had ever heard it...now it's x2!

older daughter is kirsten [keers-ten], NOT curs-ten, like she still gets... younger is ingrid, no one has screwed that up... yet!

This past week, while riding a shuttle bus to and from the clinic, I was listening to people of diverse ethic heritages, speaking to one another, and I realized how anglicizing names and other words takes the beauty right out of so many of them. How sad.

I've loved learning about some of your family tree! Thanks so much for sharing them with us!

I have an aunt named Moteen and my great grandmother was Leticia....but I've heard these names for so long, that they aren't strange to me, but if I tell them a story about my aunt Moteen, people are like "What kind of name is that??"

Great post, Debra! Names fascinate me...I keep an ongoing list of ones I like and of ones that are just plain weird.When Igot married forty-two years ago,it was traditional for the bride to take the groom's name, though it's not so common today.I planned to hyphenate names so I could keep my own. Problem is, my surname was Gillan, and no way in hell could I see going through life as Lynette Gillan Killam, when I could hardly get my tongue around it...LOL.

I loved the comment you left on my b-day post..one year to FREE GOVERNMENT MONEY time, indeed...yay!!