I don't know about your family but in mine, some relatives chose quite unique names for their children. Sometimes these names came from the Bible or commemorated famous people or events. Other times the choices were just kind of strange. I'm going to tell you about some of these names in the following three posts.
The most spectacular Biblical name in my family belonged to my great-great-great grandfather Eleazar. So who the heck was "Eleazar" in the Bible? 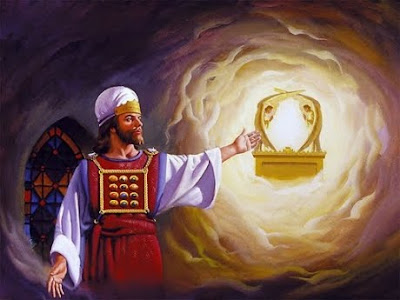 He was the second High Priest of Israel, having inherited that title from his father Aaron, the brother of Moses. As High Priest, only he could enter the Holy of Holies in the Tabernacle where the Ark of the Covenant was kept. Eleazar's early life experience included the exodus from Egypt and 40 years of wandering in the desert.
I guess my great-great-great grandfather's destiny was in his name because his early life involved an exodus as well. During the American War of Independence, his New Jersey family remained loyal to the British Crown and afterwards fled to Canada as United Empire Loyalists. They settled in the Niagara region of what is now Ontario. 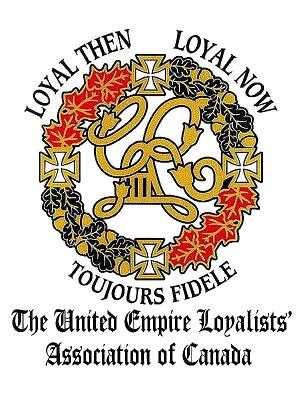 So thanks, Eleazar! You and your family are the reason why I live today in a country with universal health care, same sex marriage and no crazy Religious Right!
Posted by Debra She Who Seeks at 05:32

An interesting bit of family history!
I have read that a person is their name - so choose wisely Parents!
(And on a side note....Lucky you! To live in a country with all those perks!) :0)

We might be related, Debra. I, (she says modestly), am an actual U.E. Yes, yes it's true. No need to cower before me though. I remain humble.(You are thinking "What the hell is a U.E.?") Anyway most of the Loyalists families who settled here in Niagara are related. Cousins!

a very unique name! Sounds like some Lord of the Rings wizard or something :)
My real name is Miroslav, "mir" means "peace" in my language.

I've always been interested in genealogy, I find it fascinating. Love your grandfather's name!

We don't have any really unusual names except Mable, which was my grandmother's name, is my aunts name and a cousin's name. George is another biggie!

Now my husband's side has some humdingers, like Marmaduke!

Thanks for stopping by, wish I could send you a slice of pie, they were yummy!

Canada has some great perks!

Great post! Always love what I learn when coming here.

That is so cool! My name was chosen by my hippy brother because he liked a song by the Allman Brothers.

Ah that someone in my family would have been smart enough to head North....DH and I often feel more Canadian connection than with here.
Be thankful you are where you are.

Your family turned right and mine turned left .... ah, well. Enjoyed the history!

What a great piece of family history and I thank you for sharing it with us.
Mary

My family were perfectly content rebelling, thank you very much!

The religious right thing drives me crazy. But it would, what with my crazy belief in religious freedom for all and separation of church and state. That pesky old constitution thing.

We've got some doozy names in our family tree, but they're all pretty far back.

I don't think I have any ancestors with any biblical names, unless you count, Sodom and Gomorrah ; )

When my dad and I were researching the branches of our family tree, we found this one part of the family who named their son "Fear God Moses". yeah...

I love my country, but sometimes (becoming more often) I want to smack the people in charge and shake some sense into them. They should make me Supreme Ruler ;-)

My Mother Named me Kathleen because it reminds her of Ireland and she loves everything about Ireland. I think it's cool that she named me after a whole country.

Yes we do have a tradition of renaming people generation after generation....sorta like the stupid TV show where the one guy says "this is my brother Darrell and this is my other brother Darrell". John...yep that's the rename name. My grandfather was John Walter, my brother John Doss, his son named Timothy John. My sister married a John Evan and they had a son and named him John Everett. Then he had a daughter and named her the exact same name as my daugher Michelle Leigh WTH???? I guess that means I have a unimaginative family, who fought on the colonist side in Maryland and stayed to reap the consequences.
Great story, thanks for sharing some of your family history.
Oma Linda

YAY, Canada! I love this country. We have it pretty good here: universal health care, low crime rates, affordable education, and yup, no crazy religious right! We do have our problmes, but for the most part, things are terrific here.

Great name! Although I'd feel sorry for any kid given that name today; however, for a pet...

That was a great story. But your ancestor really did get the screwgie in terms of names.

Mine means bald, which I am so I guess it fits. No Calvin and I bet no Eleazar bike licence plates either.

Very interesting - I love unique old names like Eleazor, although I'm with Tricky Nag - can't imagine naming a baby that nowadays. Interestingly, I just finished reading George Bowering's 'Stone Country' last night (took me close to a year!) which is a history of Canada from prehistoric times through 2000. There sure were a lot of squabbles before the borders were finally settled on!

Love this story! Names are really so interesting. Here's a tidbit of a conversation I had with my grandfather not long ago:

"...and your dad, he was named after a British admiral who used to board ships and steal their cargo."

"Um...Grandpa? You named my dad after a pirate?"

"Yeah. You named my dad after a pirate."

What a wonderful story, and how fantastic that you know all of this about your family! My family didn't keep records, and oral histories weren't passed along. .some incidental stories, but nothing of any significance.

From the first time that I set food in Canada, as a small child, I fell in love and wanted to move there, but my small vote didn't make the slightest impression on my parents. Sigh.

I come from a family with hardly any interesting names... years of repetition of Thomas, Charles, George for the men and Sarah, Mary, Elizabeth for the women. I did uncover my great, great grandmother was named Herodius though.