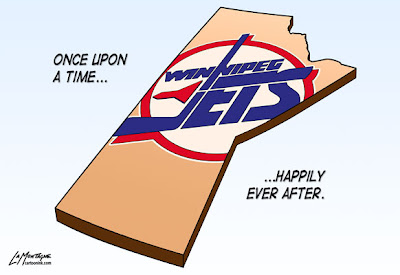 Now that the month of June and Translesbigayapalooza are over, I finally have the time and space to comment on the Big News that Winnipeg is Jetless no more! And Big News it is, indeed.
I was living in Winnipeg in 1996 when the NHL moved the Jets to Phoenix. That was a grim, grim day in The Peg. After the loss, the city was like a whipped hangdog cur.
But now, 15 years later, economic factors have changed. The Canadian dollar is strong against U.S. currency, the NHL has a salary cap and Winnipeg has a new downtown arena. Now the boys are back, woo hoo!
And I'm glad to see that management made the right decision to call the team by its old moniker too. After all, hockey clubs are steeped in history here in Canada and continuity is important. Besides, what the hell else could the team be named? 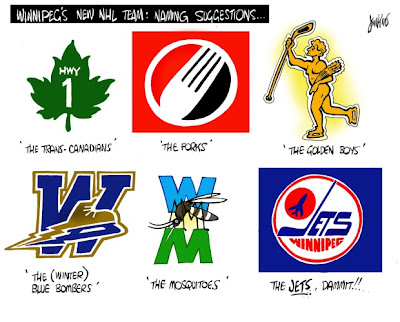 [Top cartoon by Patrick LaMontagne. Bottom cartoon by Anthony Jenkins of the Globe and Mail.]
Posted by Debra She Who Seeks at 05:32

Congrats on getting your team back! Can the rest of us migrate to Canada too?

i love seeing more hockey back in canada!!!

And it is damn well ABOUT TIME!!!
And what could they be named OTHER than the Jets??? (can you tell I am passionate about my hockey?)
Now if some brave soul can help Phoenix escape to the Great White North......I'm thinking the Nordiques reborn...eh?
GO JETS!!!!

Congrats on getting your team back!

I was so psyched to see them decide to keep the Jets name. They are a part of Hockey History, and one of the original WHA teams. I'm still saddened that when we lost the North Stars, they took the name with them to Dallas. As much as we love our expansion club here, there's no history behind them, and the "Wild" nickname is just plain dumb. If we couldn't get the North Stars name back, they should have at least gone with the St. Paul "Fighting Saints" moniker.


Now if we could just get them to move the franchises back to Quebec and Hartford, all would be right in the hockey world.

Congratulations. Glad you got your team back =).

Congrats on getting your team back. I don't follow hockey unless a New York team is in the playoffs, but I know you are an avid fan and I am so happy for you.
Mary

I was thrilled to hear that they were coming back to where they belonged....I just think there are some things that should not be messed with. and your right they are a part of our History....so yeah jets.

hot damn..yeah, for you and your Jets.

Happy news for Winnipeg!! We are Buffalo Sabres fans, though. It will be great to have a new foe!!(hissing sound goes out to the Senators!)

glad the boys are back in town.

It was 15 yrs ago? Wow, I remember that clearly. I'm happy they are back too!

Good news for Winnipeg! But hockey just hasn't been the same (for me) since Patrick Roy and Joe Sakic retired....

The mosquitoes is being saved for Minneapolis. Trust me, they deserve that moniker.

Congrats on the Jets. And now I have a West Side Story singalong going on in my head.

When we were in the Peg last week we had a number of people remark how happy the city was about this.

Love the 'Mosquitoes' though!

The team is BACK! Exciting. =D

Yay...so glad they're keeping the name! But damn, I wish your friend hadn't mentioned West Side Story...my fingers and hips want to get moving now...:)

I love this story. Not only because it means another Canadian based team in the NHL but because it involves Winnipeg, one of my favorite cities ever. I lived in Manitoba for 7 hears before and after I lived in Europe. I was born at St. Boniface hostpital. I saw Star Wars for the first time in Winnipeg. I spent many summers bumming around the city by myself when I was a teen. Downtown, a matinee, the Museum of Man and Nature would fill my days. The Golden Boy, Portage and Main (the coldest corner is all of creation), Osbourne street - the grubbiest dead end street. No really, the is only one way in and one way out. And our relatives had a house right at the end of that deadend which was in actuality the back of a large Apartment building. So even sunlight doesn't reach the people who lived on Osbourne Street. Winnipeg was also the destination of the train I jumped on when I was 14. I knew how to get from the base to the city and back again by the base to base busing system.