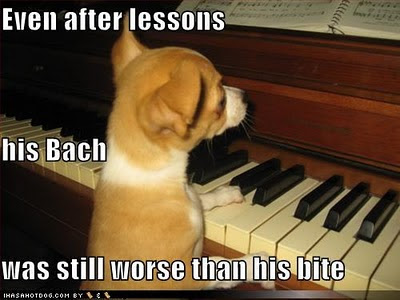 I love baroque music, especially anything by J.S. Bach. The beauty and mathematical precision of his music speak to my finicky Virgo soul, LOL!
I read once that the "clockwork precision" of baroque music reflected the 18th century European belief in a "clockwork universe" -- namely, their unshakable belief that The One True Judeo-Christian God was firmly entrenched in heaven, was in absolute control of everything and that all things worked strictly according to his Master Plan.
Want to see a fascinating visual representation of Bach's clockwork musical precision? The following video graphically illustrates how his music builds on itself, how the edifice of sound is constructed, so to speak. Watching his music adds to the delightfulness of listening to his music!

Thanks to Mercurio who posted this video on his blog, Captain's memoirs, which is where I found it.
Posted by Debra She Who Seeks at 05:31

Bach is supposed to be conducive to studying, and I believe his music helped me with my studies.

The brilliance of Bach! Complex and so beautiful! Love this video. Thanks!

Baroque it is ! Wonderful!

I too love Bach, and listening to his music this morning just adds to the peacefulness. .aaaahhhhhhhh. .

I'm going to have to show my Hubs this clip. He hears parts as a whole, and cannot distinguish different instruments in an orchestra or band, nor vocal parts in choirs, or even quartets. Maybe seeing this visual, will help him to understand. Thanks for sharing it!

This is really neat - Amazing how his mind worked just like 'clockwork'.

Now, this was nice!

I had a roommate who put classical music on from 7:00am to 10:00pm. Now I grimace when I hear it. Visually is the ONLY way I can now enjoy Bach and his cronies!

Will be using the vid to explain Bach to my little witchlings in their lessons soon. Thanks for the find.

Hell, don't a lot of people still believe that The One True Judeo-Christian God is firmly entrenched in heaven, is in absolute control of everything and that all things work strictly according to his Master Plan?

Bach rocks, but I'm more of Telemann fan myself. Nothing tops baroque.

Amazing. Thanks for sharing this with us.
Mary

Oh what a wonderful way to start my morning!!...enjoying the video with Bach, and the awesome visuals...that was really something. I've always thought that there is more to music and our brain that we haven't quite discovered yet...messages outside of just the music on our ears. I'm sure it's been studied...but not so sure there have been any earth shattering developments as of late...but I still think there is something else to be found in it. Recently I recently heard musical notes recorded from deep within the earth's core, and it lead me to believe that when we figure things out with our music we will then have more definitive answers to the universe and it's melody. Thanks for a good morning start. Have a great weekend Debra.

"finicky Virgo soul"..... You know in all honesty...I would not have pegged you for a Virgo. Now you've got my head spinning....hmmmmmm.
See I concentrate on the trivial pursuit lessons of blogs.
Oma Linda

Ooh that filled my heart and made my spirit so light:) Thank you!

love this classical piece, this type of classical music is what got me into pianos

I just showed the video to my Hubs, and I was right! He really enjoyed seeing the parts, and it made it easier for him to distinguish the different notes and what each hand was playing!

I'm finding the comments interesting too! You always post such neat conversation starters!

Hey I don't know that joke! About the pony! Lois

I agree with Suzie...you really do post the most interesting conversation starters! That is why I love it here!!

Seeing this makes me really understand why I cannot play like that....and probably never will. :)

Wow, that was truly uplifting and the visual aspect further enhanced the experience. Thanks!

Lovely. Thanks for posting. Do you play piano?

Alas no, Makropoulos. I play the recorder very badly though, if that counts!

I agree my Virgo sister.

the whole "listening to bach raises your iq" thing is a myth, just so everyone knows.

I love Bach as well!

Sadly, I stopped listening when I learnt that classical music wasn't cool in high school.

Sigh. This is bliss.

Another Virgo! I am on the Leo cusp, and born on a full moon to boot, but undeniably Virgoan.

Just beautiful! Thanks for sharing this with all of us. And I love that hilarious photo of the dog. You always need to add a little humour everywhere.

Love the visual too. And I think that would be good for hard-of-hearing listeners trying to focus in on all the complexities.