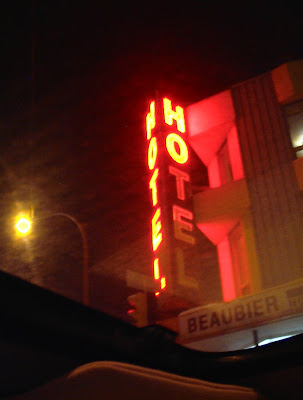 Yes, Moochie had indeed turned over a new leaf and set himself up in business. He boasted to my parents that he had acquired a stable of three aging prostitutes who he was pimping out at the local skid row hotel. "My heavy chevies," he proudly called them. Business was pretty good too.
My parents were mortified, of course. They prayed he would not identify himself as a relative to anyone they knew.
Moochie's career lasted for a while but eventually he was arrested and convicted for "living off the avails of prostitution" as it's called. Presumably he served a bit of jail time. Or perhaps not. Who knows? The last we heard of him was that he had moved to the West Coast where his brother lived. He died there a few years ago.
I'm sure he was able to con his way into heaven. Rest in peace, Moochie.
[Photo by Sean Carruthers and found on his website here]
Posted by Debra She Who Seeks at 05:30

i wish any of my relatives had been this interesting!

I was sorry to read that he passed away. I would have enjoyed reading about his 'adventures' for a long time to come. Thnks Debra.

I kinda expected this ending for Moochie!

Well..I guess you can say he lived a colorful life..on his own terms. May her rest in peace!
Hugsm, Sarah

I just wanted to say hello Beautiful ♥ I am but want you to know I am thinking of you.

This is the kind of relative that make family stories interesting...be glad he was part of yours...

He lives on in the family stories, especially at family get-togethers. Once the person of aggravation and frustration, he now provides humorous memories and bits of introspection. We should all have someone so colorful in our family trees.

Thanks for sharing Moochie's story. It was an entertaining read!

Great story -- as one of my creative writing teachers once said -- sometimes you have to fictionalize reality a bit, because sometimes reality is a little too extraordinary to be true. And yet, it is --

Nahhhhh! I wonder if my great aunt was one of his gals! Could be where I get my talents, isn't it all in the family?

Moochie?
That should totally be MY nickname.