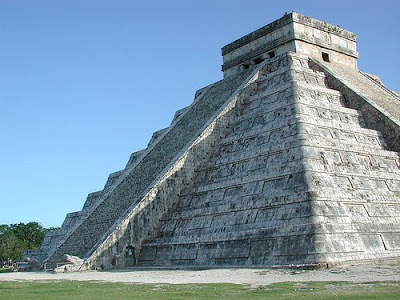 Every spring and autumn equinox, the plumed serpent of light named Kukulkan makes an appearance at Chichen Itza, the ancient Mayan site in Mexico. For about half an hour, sunlight strikes the staircase bannister of El Castillo pyramid in such a way as to create an undulating body for the snake deity whose carved head is found at the base of the stairs. Kukulkan appears only twice a year, when day and night, light and dark, are equal and in balance.

My Rare One and I visited Chichen Itza in 2004 (but not on an equinox, alas). I climbed El Castillo's sacred staircase, a difficult task because of its extremely steep and shallow steps. I descended the stairs in the traditional manner -- sitting and bumming my way down each step! It's the safest method because it is so very easy to trip and fall all the way down if you walk upright. That's why an ambulance was tucked away in a nearby grove of trees, as we later noticed. In fact, I read recently that tourists are now no longer allowed to climb the pyramid, precisely because an elderly lady did have a fatal fall on the staircase.

I have been there many times. My favorite place in the world is on top of that pyramid and the sacrificial cenote near by.

I agree, that staircase is just damned scary.

wow, lucky you, I can only dream of visiting ancient sites in South and Central America!

I visited Chichen Itza in 1996 on my honeymoon. It was amazing.

I partially climbed a similar pyramid in Mexico and had a wild experience there and you're right, so steep, which is why I turned and went back down the steps along the bottom. Bumming it was much wiser! There was an elderly gentleman above me who fell. I heard a voice tell me to "use my body". I turned around to look at the voice and saw the man plummeting towards me. I threw my body on top of him to stop his fall, following the voice's advice and thankfully saving his life. One of the most spiritual things to ever happen to me but also kind of freaky!

I love fall, its my favorite time of the year, but I dread the shorter days...and the fact that it will soon be dark out when I leave work.

I don't think I would have the courage or the stamina to make that climb. How great though that you have been there, and done that!! Blessed Mabon to you and yours!!! (with a careful pat to the head of HRH!)

wow, what an adventure,, I have dreamt of this place,, I mean I have really dreamt of it,, I have a great curousity for this culture,, lucky you!!

I've never been there before but have wanted to make the trek before. What an amazing place it must be to visit.
Blessed Autumnal Equinox to you,
Bird
@ http://birdsearthyspirit.blogspot.com/

I was in Mexico in 2010 and we went to different site where we could walk to the top, although I could not. Husband went all the way up and down, I had anxiety attacks 10 steps up. We went to another site which was overgrown and infested with lizards, it was so cool. Apparently they were all connected by straight roads, almost as cool as the romans... Loved Mexico. Happy Equinox!

We went to Tulum in the last 1990's...isn't it awful not to remember when...anyway, it was wonderful...such a feeling that I do remember...Hubby leaned on a doorway and almost knocked it over...

My daughter visited Chichen Itza not too long ago and they were not allowed to climb...though they were told it was because of deterioration of the site...

Glad you got to visit before they close it completely...

That's an amazing place...not sure I would have been as brave to climb those stairs. Bumming your way down sounds like the only way to go. ha!
Happy Autumn Equinox to you...can you feel it? There's a sense of balance in the air this morning.

Amazing place, went there in the 80's. Couldn't climb it though. But the whole vibe of that part of the world and the cultural history is so rich it is almost dripping in the air. Oh wait, that was the humidity. I love Mexico, it makes me so sad that I will never be able to go again but I can say I did. Oma Linda

I've always wanted to visit there. Such amazing places. Wishing you and yours blessings on this special day.
Mary

good old chichen Itza! i was there with friends and one of them went up and froze. she couldn't move. it tooks hours for us to "walk" her down flat on her stomach and backwards. i don't think she has climbed as much as a ladder since then!

Don't know why I was expecting it to look different, but I see the undulating snake in the photo now. "Kukulkan" is a mouthful though; I'd simply name it "George". Silly Mayans.

interesting. you always hear about things aligned to the solstices, but not so much to the equinoxes.

Isn't it amazing what these 'primative ' people were able to do. When I see things such as this I am awestruck.
Thanks for sharing and thanks for visiting my blog
Johnina ♥♥♥

I was there years and climbed it, too. It was 114 degrees at the bottom. I was young and open to a lot more then. It was a glorious place.

beautiful photo Debra...glad you made it down safely:-)

Not being a lover of snakes I think that you have convinced me otherwise to maybe give this place a look. If we are ever in Mexico we will check this site out and will be careful noit to take a tumble.

I am so happy that we have reached shorter days with cooler ones one the way soon. So tired of this heat! Move along, Sun. People way down south are missing you!

It's on my list!
I'm always amazed how so many civilizations knew how to build structures to make the most ofnthe sun. What a shame we don't do that today.

And a Happy Autumn Equinox to you!!!
A place I've always wanted to visit....so full of mystery and enigma.

Interesting......thanks for sharing this. I've been watch documentaries on Net Flix about ancient religions and civilizations......fascinating.

I love this site

Don't want to appear pedantic but Chichen Itza is not an ancient Mayan site. Tourist misinformation. It is a Toltec site built almost 1,000 years after the heyday of the classic Mayans. It bears much more resemblance to sites in central Mexico than it does to places like Palenque or Tikal. It is impressive, to be sure, but reeks of death.

Yes, Xtoval, I too found the culture's death worshipping aspect troubling and off-putting.