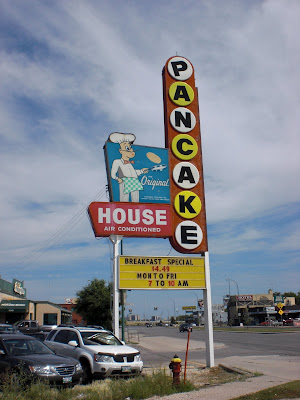 Every time I'm back in Winnipeg, I try to make it to the Original Pancake House on Pembina Highway for a Baby German pancake. It's my favourite kind of pancake and I can't (*sob*) get one anywhere in Edmonton.

A Baby German pancake is baked in the oven. Brown, with slightly upturned edges, it has a denser texture than a griddle cake. And you don't eat it with syrup, oh no. You squeeze fresh, juicy lemon wedges all over it and then shake icing sugar on top. The thick sugar dissolves in the lemon juice and makes a creamy, delicious sauce. Mmmmm, heavenly!

The Original Pancake House was one of my old stomping grounds when I was a university student. It was a little shabby and rundown in those days. The owner obviously did not want to put a lot of money into upgrading or refreshing the decor. A skinny old geezer, he always sat on a hard wooden chair near the cash register at the entrance so he could keep his rheumy gimlet eyes on the waitresses and kitchen staff at the same time. He just sat there hour after hour, the undoubted king of his castle, barking out an occasional command.

After his death, the family extensively renovated the restaurant and added a beautiful solarium wing. No wonder it's one of Winnipeg's most enduringly popular brunch spots. I think they have a couple more locations now too. But I always return to the original Original.

And you know what? Even with all the changes, they still use the same brown coffee mugs they used in the 1970s! I suspect the old geezer's ghost likes that.

great little bit of history of a place i frequent often. well, i frequent the local pancake house, not the original.

how cool is that.I like that they still use the same mugs,, some things not changing is what can bring real joy to our lives.I have never had a german pancake but they sound heavenly,,

I've never had one of these, but it sounds delicious. I like that they still use the same mugs. It's always sweet that a little bit of your past is still around.

OMG...LOVE me a German pancake! The old brown mugs...not so much! LOL

That sounds fantastic, and I love a good pancake, but I'll have to admit I giggled a little when you said you were eating a baby German.

Nice little bit of nostalgia Debra. I enjoyed your telling of it!

it does sound very good....but every mug has it's day....might be time for a bit more of a make over...hope they clean the kitchen and don't get all nostalgic over that!

Sounds delicious. I'd love to try one.
Mary

ooooo yum!! Those pancakes sound amazing..i'm a pancake lover thats for sure lol You are the 2nd blog that has talked about food this morning and now I'm starving! lol

I've never ever had a Baby German pancake (or heard of it). Sounds yummy!

I can smell the bacon.

Mmmmm sounds heavenly! Love places with history like that. Thanks for sharing!

Isn't it wonderful when you can go back to the past and find it every bit as wonderful as you remebered or as in your case even better. For this last birthday I got Chicago style pizza from the same restuarant (my favorite) I went to as teenager. They now deliver all across the US and I was in heaven.
Johnina :D

I am literally salivating. SALIVATING I tell you!

Have never heard of a Baby German pancake... will have to search around here in the States for one....
In the mean time, will have to suffer through the heavenly pancakes Hubby makes from a recipe handed down from his Grandmother.

I love places like this. Next time I'm through there I'm hunting down the original and having a baby German pancake.

OH, God. There are few things I love more than a good old fashioned pancake house like that....
Love the sign!

I was just lamenting this week about how the local pancake restaurant was no more. It is so sad when something special like that is gone forever.