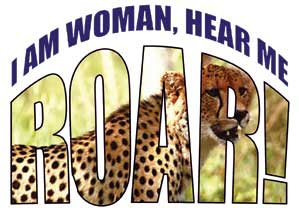 I became a feminist the moment I heard that such a concept existed. That was in 1970, when I was thirteen. "Women's Lib" (as it was so quaintly called in those days) was just starting to emerge on the national scene. I learned about feminism from the media, of course. As soon as I heard that feminists believed that women were equal to men, I knew that I was a feminist too. In the 39 years that have passed since then, my beliefs have never wavered -- grown and evolved, yes, but never wavered from a basic belief in, and commitment to, the feminist ideals of equality and choice. I've always tried to live my life on feminist principles and I think I have succeeded in that.

And yes, I confess that in 1972 I bought a 45 rpm of Helen Reddy's I Am Woman and played it incessantly. It's still kicking around in one of my storage boxes -- I should get it out one of these days and play it again, full blast, for old time's sake!