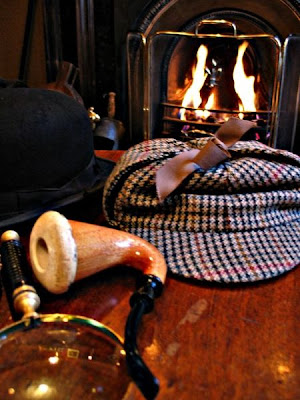 Last weekend, my Rare One dressed up as Sherlock Holmes, complete with a cape, deerstalker hat, big pipe and magnifying glass. I dressed up as Dr. Watson, with a vaguely Victorian suit, top hat, doctor's bag and stethoscope. No, we were not engaging in anything kinky! We were attending a murder mystery which was part of a fabulous 60th birthday celebration honouring a dear friend. The murder mystery was staged by professional actors, but the guests had to come dressed as their favourite detective or mystery character.

Other guests included Miss Marple, Colonel Mustard, Mrs. Charlie Chan, Nora Charles with her (stuffed) dog Asta, Columbo and a couple of Dick Traceys. Although their connection with the mystery genre was not clear, Anne of Green Gables and Matthew Cuthbert also showed up from Prince Edward Island. Plus the world famous, khaki-wearing Cougar Hunter attended. She had rich pickings indeed in our crowd.

And there were Sherlocks galore, four in all! But there was only one other Dr. Watson -- the rest of the Sherlocks came stag. One Sherlock was in repose after a hard day of solving mysteries, wearing a silk dressing gown and pyjamas. The second Sherlock and Watson were very nattily dressed, on their way to a London opera. The third Sherlock had a lovely deerstalker hat purchased in Red Deer, Alberta. My Sherlock went around accusing the other Sherlocks of being obvious imposters.

My stethoscope came in very handy for checking the heaving bosoms of many damsels in distress. "Trust me, I'm a doctor," I assured them. "You're in good hands." A bit more subtle than the Cougar Hunter, I'd like to think, but equally effective.