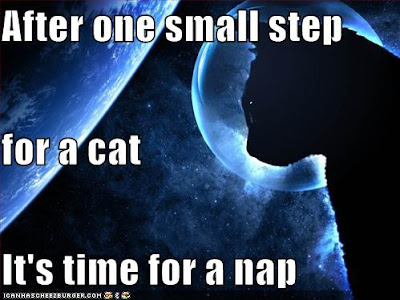 Forty years ago today, the first human being walked on the moon. I remember watching that grainy black-and-white footage on television, over and over again, listening to Neil Armstrong screw up his carefully scripted historic remark so that it made no logical or semantic sense ("one small step for man, one giant leap for mankind" instead of "one small step for a man, one giant leap for mankind" -- d'oh!)

Everyone was so excited by the lunar landing! Every kid I knew dreamed of growing up to be an astronaut. No, wait . . . that's not entirely accurate, now that I think of it. Every boy I knew dreamed of that. Girls didn't, because we were told that only boys could be astronauts. Oh yes, it's coming back to me now, that era . . . So how sweet it is that on the 40th anniversary of the lunar landing, our own Canadian astronaut, Julie Payette, is currently in orbit with the latest space shuttle mission!

Labels: Down Memory Lane, I Am Woman Hear Me Roar

hope i live long enough to see them walk on mars...cool!