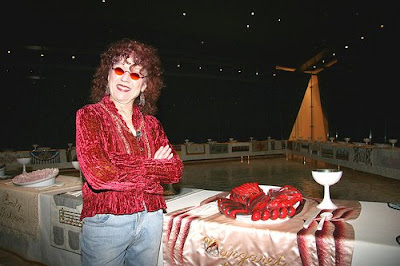 I have long been an admirer of the American feminist artist, Judy Chicago (pictured above). In the late 1970s, she created her most famous work, The Dinner Party. It consists of a huge, triangular, ceremonial banquet table with 39 place settings. Each place setting honours a woman, queen or goddess from various historical eras. The installation is rich with embroidery and other needlework and each place setting features a magnificent ceramic plate capturing the essence of the honoree.

The Dinner Party toured North America for the first few years after it was created. In the early 1980s it made one stop in Western Canada, in Calgary. I know many women who travelled great distances to see it, often from one or two provinces away. My Rare One was among those lucky women who saw The Dinner Party at that time. But unfortunately, I was not able to attend the exhibit.

When the tour of The Dinner Party was over, no art gallery or museum in the United States would agree to put it on permanent display. This refusal to provide exhibit space forced Judy Chicago to box up The Dinner Party and store it in a warehouse for nearly two decades. The Art Establishment's scandalous treatment of The Dinner Party caused great resentment among feminists.

Finally, about 5 years ago, the Elizabeth A. Sackler Foundation was able to create the Centre for Feminist Art at the Brooklyn Museum in New York, specifically for the purpose of putting The Dinner Party on permanent display.

Tomorrow's post: my pilgrimage to see The Dinner Party!

Labels: I Am Woman Hear Me Roar, Mainland USA Trips

Oh my gosh...how amazing! I never heard of the dinner party...but I would love to see this exhibit. Thank you for introducing me to Judy!

Can't wait to read about your pilgrimage!

i had never heard of it either..but would love to see it..wonder if they will set it up to be seen on line?

Thanks for your comments and interest, Caroline and Yellowdog Granny! Tomorrow's post will have a link to a fabulous website about The Dinner Party so you can explore it further, if you want!