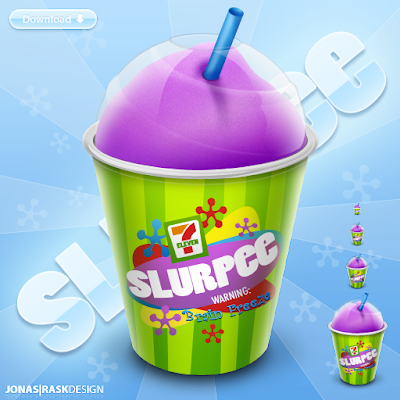 For the tenth year in a row, Winnipeg has been named the Slurpee Capital of the World! Not of Canada, not of North America, but of THE WORLD!! Calgary finished second and Detroit third (psshh, losers!)
You know what Slurpees are, of course -- those florescent, sugar-laden, pop and shaved ice concoctions sold by 7-Elevens everywhere and immortalized on The Simpsons as "Squishees." The ones that give you instant brain freeze.
As reported by the Winnipeg Free Press a few days ago--
Slurpee sales [in Winnipeg] rise when temperatures soar in the summer, but they also remain steady when the mercury plummets to -40 C. Slurpees have fast become part of the culture in Winnipeg, [7-Eleven Canada spokeswoman Sheila] Calder said.
"What differentiates Winnipeg is people drink Slurpees in every season. In winter, kids are having Slurpees while they're out tobogganing," she said.
And that's what makes Winnipeg great. The Jets may be gone, the Blue Bombers may be crappy, but none of that matters. Winnipeg is the World Champion of Slurpee Consumption!
Posted by Debra She Who Seeks at 06:35

&-11 left Amarillo twenty years ago so no Slurpees for me.

I haven't had a Coke Slurpee in so long. I think I will get one tomorrow! But, geeeeez! How can they drink them when its 40 below? That's some hardy people for ya!

You are the toughest and most dedicated foodies in Canada! Wow!