Moby-Dick in the 21st century 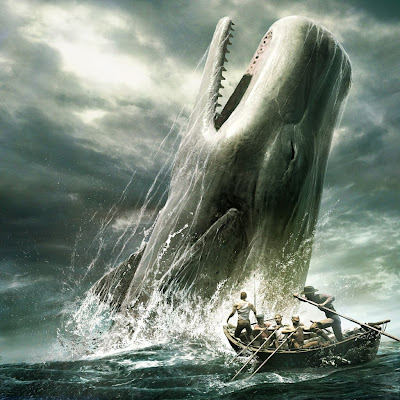 I'm currently reading Herman Melville's Moby-Dick (which makes my recent LOLcat post so fortuitous) and man, that book is frickin' HUGE. Sort of like the great white whale itself. Melville sure could have used a good editor, that's all I'm saying. I've tried to read this novel before, but have always been defeated by the teeny tiny print used by publishers to cram all that text into a single volume. The eye strain just wasn't worth it.

But now I have found the free website Literature Page which has full online texts of many classic works of literature in the public domain. It features novels (and some poetry) primarily by American, British, French and Russian authors. So now I'm attempting to read Moby-Dick again, but this time using zoom view to full advantage. It's so great to have a larger text version!

And my, my, my! Melville's coded homosexual imagery is a lot more obvious to a 21st century reader than it would have been to the average mid-19th century reader. It's clear, for example, that Ishmael and Queequeg were gettin' it on! Hey, this is my type of book!

Debra:
I'm proud of you for attempting it again. I've just never been able to read the book...ever....

And, thanks for the direction to Owl's page. You're right, I did like the poem very much...and a good blogging friend of mine, Cam has that same last two lines on her page close to her header.

I'm beginning to see a pattern emerging. Thanks for helping to connect the dots, and your birthday wishes. It means a lot.

I started reading classics (at my fathers urging when i was about 9) and I was about 10 when I read Moby Dick...I told my Daddy...them boys were really good friends...I thought the book was too long but liked it very much..then i saw the movie and thought what?....

That's going to be a lot of text! That is one long novel and I agree, I think the book needed a good editor too. I read the book, most of the time not really understanding what was going on. Loved the concept though and am glad I "made it" to the ending. Enjoy the online read though, that will make it easier and wow, I love that image! I was of course routing for the whale the entire time. OK, back to my no-commenting-closet!