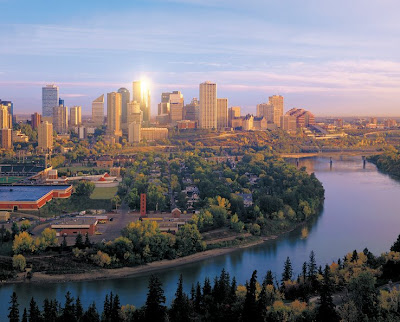 In the mid-1980s, the Edmonton Oilers ruled the hockey world. And so Mordecai Richler, the great Canadian author, came to Edmonton to interview Wayne Gretzky, the great Oilers captain. As Wikipedia says, Richler delighted in "acerbic journalistic commentary and . . . the role of contrarian provocateur." This is what Richler wrote about Edmonton in his article --
If Canada were not a country, however fragmented, but instead a house, Vancouver would be the solarium-cum-playroom, an afterthought of affluence; Toronto, the counting room, where money makes for the most glee; Montreal, the salon; and Edmonton, the boiler room.
Edmontonians have hated him ever since for this insult to their civic pride. When Richler died in 2001, every newspaper article in the city picked at the scab once again and implied that Richler would not be missed in this neck of the woods.
I think Richler's insult stung so much because there was a certain degree of truth to it. Compared to other Canadian cities, Edmonton did not boast a lot of beautiful historic buildings, spectacular architecture or sophisticated neighbourhoods. Although great strides have been made in the 25 years since Richler's cruel assessment, significant parts of Edmonton are still quite pedestrian and some parts are downright ugly. But Edmonton is blessed with a magnificent river valley full of hiking and biking trails and parks that is among the best green space to be found in all of North America. There has also been a concerted municipal effort to create attractive buildings and public space in downtown Edmonton. But Edmontonians remain defensive about being seen and dismissed as the boiler room of Canada.
[quotation from Mordecai Richler, "Gretzky in Eighty-five" reprinted in Dispatches from the Sporting Life (Alfred A. Knopf Canada, 2002), p. 108.]
Posted by Debra She Who Seeks at 06:33

I love it. Very interesting blog. I am seeking also.

Seek and ye shall find, Michelle! Thanks for coming by!

I'm a former Edmontonian, removed for 5 years to Montréal and now Vancouver.

People don't always want to hear the truth. Edmonton, if seen from the ride in from the airport, is pretty damn ugly.

Although, I should add that very few tourists ever walk through the river valley and instead head straight for that horrible over sized mall.

No wonder people miss out on the beauty of Edmonton. They aren't looking in the right places.

The fact that Edmonton feels such powerful disdain for one of Canada's greatest wits proves that the city is worthy of the title Richler gave it.