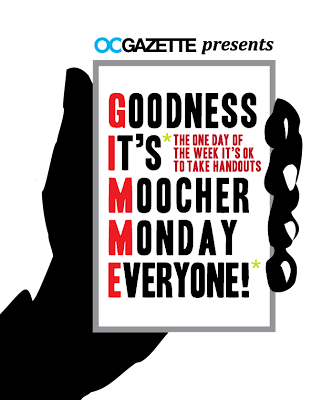 Every extended family has at least one ne'er-do-well and in our family it was my cousin Moochie. Once upon a time, he had been apprenticed to a sign painter but had never subsequently worked a day in his life, so far as anyone knew. I don't think he had addiction problems or anything. He just preferred to lead a life of leisure. This gave him lots of time for sex which was a favourite activity, obviously, because he and the wife had 10 or 12 kids over the years. Moochie was a fun guy, always laughing and joking. He was a bit of a con artist too, with no qualms whatsoever about creative mooching.
When I was a kid, we didn't see Moochie and his family all that often because they lived about an hour away from us. Municipal assistance was not generous enough for the Moochies to be able to afford a vehicle so they were pretty restricted in their movements.
Until that one fateful summer when -- how, God, how? -- Moochie managed to acquire an old beater of a car. A bit of gas mooched from somewhere or another and . . . woo hoo, road trip!!!
Tomorrow: Moochie's Sneak Attack
Posted by Debra She Who Seeks at 05:31

You have the fine gift of knowing how to spin a story. .and where to leave us hanging for the next installment! lol

I should have waited until later in the day to read today's post, so that I wouldn't have to wait so long to see what happens!!

Ooohhh, this should be good! :0)
I can remember a cousin - I think from my Father's side of the family - who would come see us every summer. All his possessions were piled in the back seat of his car. I remember my Mom saying that he just drove around from relative to relative looking for hand-outs and a place to stay for awhile. He never stayed long at our place. My Mom would always put him to work in the yard!

Ok now you have me hooked,, sheesh,,,can't wait for the end of this one,, have trhe best day!!

omg.......am awaiting the next segment, because I *KNOW* it's going to be good.
And yes, EVERY FAMILY has at least one, or two when you count who you married~~their kin. In fact, I think between DH an I, or ration is probably above the norm....
Yikes.

I really enjoyed What's in a Name and now we have Moochie! :D :D :D :D

Now that is the perfect charchter eveyone needs to have in their family. He sounds like someone who knew how to live life and have fun. Sounds alot my my father's cousin Billy.

He sounds like a character from da "Sopranos." Your family keeps sounding more and more interesting, Debra, can't wait to hear more about Mr. Moochie..

I love this! I think I have a few relatives like that. ;)

Oh yeah...you've hooked me as well. Moochie...could be a relative of mine. I think we all have a Moochie...and so I'm looking forward to the sequel to this story!!....how do these Moochie's manage to have such good and happy lives? Maybe I need to learn their secrets. I wouldn't want to be a Moochie...no not really....but they do have such leisurely happy lives, and who wouldn't want lots of time on their hands for sex? Ooops...maybe I've said too much....

Can't wait for the follow up. It has to be good.
Mary

Look at you with your theme posts and now the adventures of 'Moochie' - another interesting name. Brilliant.

Ha ha...loved it! You are such a wonderful storyteller. Can't wait for the rest :)

Looking forward to it!

I've known a few Moochies in my life.....can't wait to hear about yours.

I have to admit, I have mixed feelings about this post, due to the state of the economy in my country. I know it's supposed to be amusing, but I'm just having a tough time with it. There are so many people unemployed and having lots of self-esteem issues around it, right down to committing suicide because of it...sorry, this is a very sensitive subject in the US at the moment .....

it's a hard topic.

Another interesting family name, too.

hmm, I feel left out..we have no moochers in our family..but we do have an abundance of assholes.