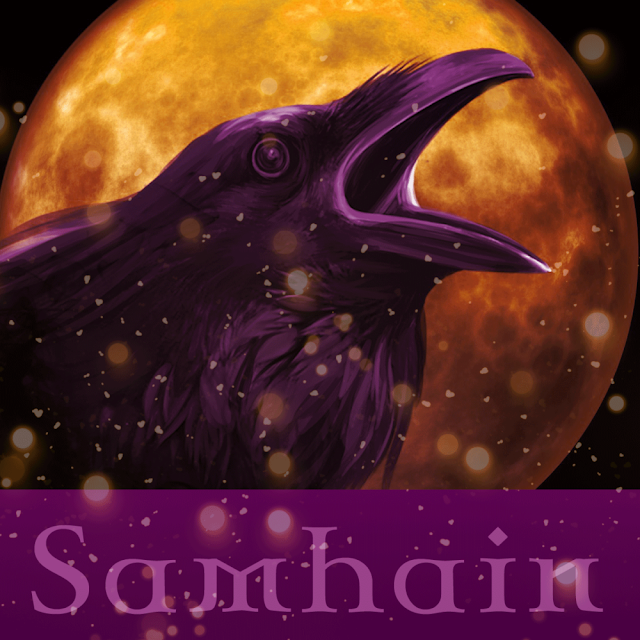 Halloween is not all fun and games.
It has a serious spiritual basis.

The Wheel of the Year has turned once more and
it is now time to honour the Crone Goddess. 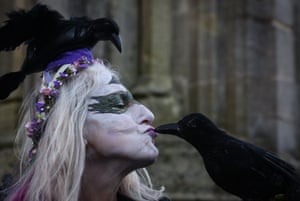 In Celtic spirituality, the Raven is
a sacred familiar of the Crone Goddess,
aiding her in the tasks of preparing
for the grave and renewal. 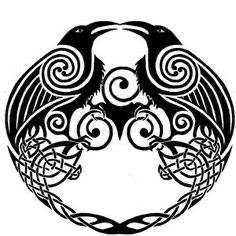 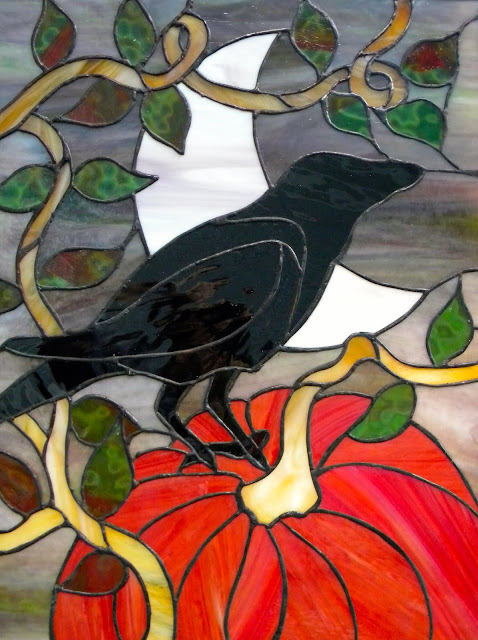 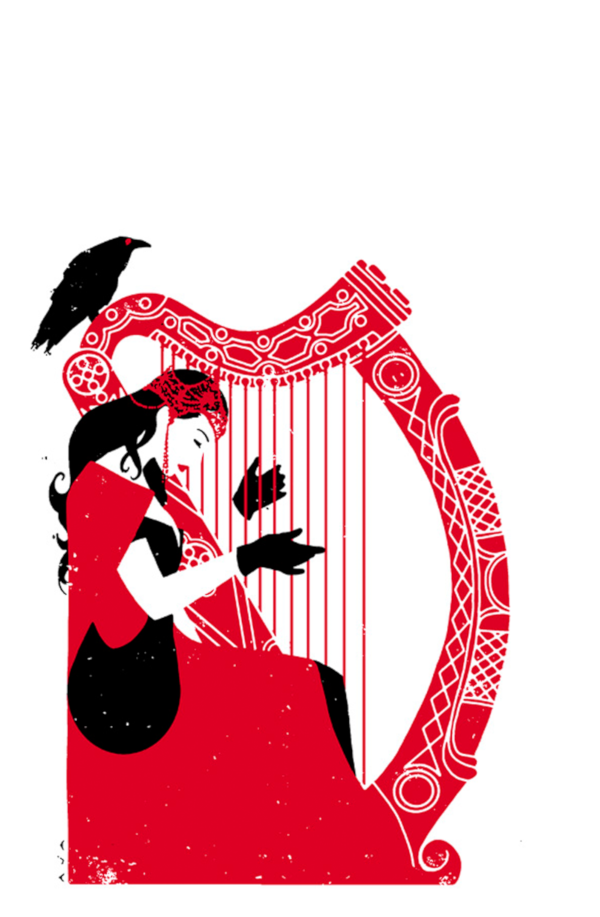 The Raven is a shamanic creature.
It easily flies back and forth between the worlds,
bearing messages and omens. 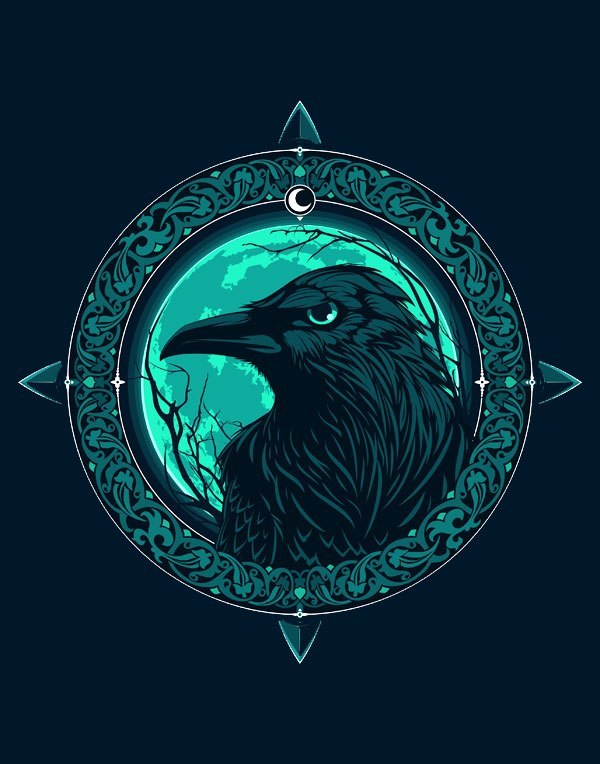 The Raven's association with death
extends especially to death in battle.

The Raven often accompanies the Celtic
War Goddess known as The Morrigan. 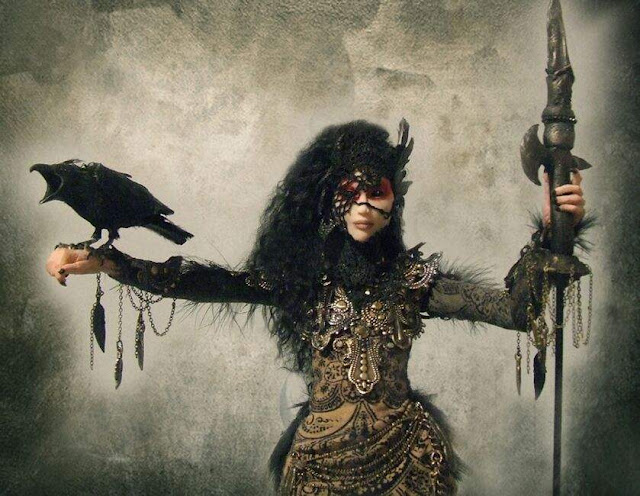 The Raven remains a powerful symbol from ancient times . . . 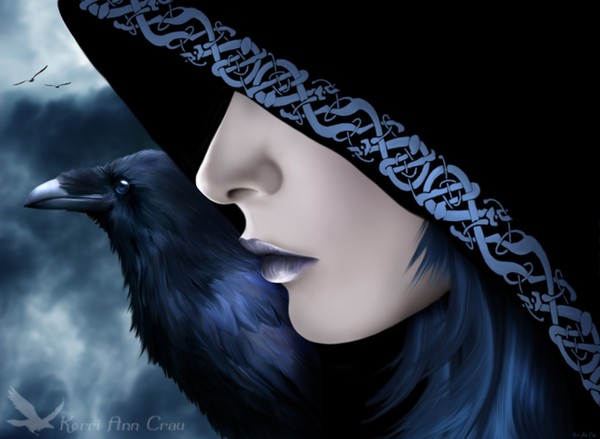 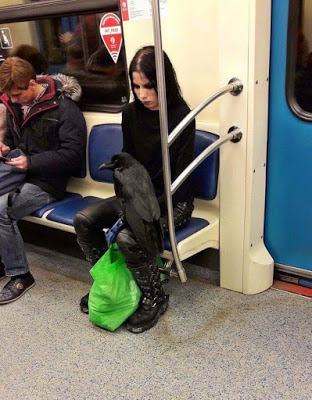 The Raven reminds us all to
remember and honour
the passage of time. 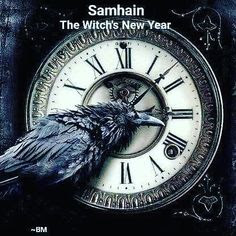 nevermore. blessed be to all!

That picture with the woman and her staff (I think it's a staff) and her familiar is simply stunning. She looks elegant and powerful! I love it!

Samhain blessings to you. It's one of my favorite days of the year.

Blessed Samhain to you too. I love me my raven Nocturne, so you know im digging the woman on the train!

"Finally a blog post that makes sense of Halloween."
quote the raven nevermore.

A blessed Samhain to you my friend,

i want to sit on the subway with a raven on my lap. how cool is that? blessed samhain right back atcha!

Here in the Catholic part of my country it is All Saints when all go to graveyards to take mums and candles to the graves of their deceased ones.

Thanks for the information. Such mythology is interesting.

I have always liked ravens.

Happy Hallowe’en! A raven on the subway or bus! Awesome!

Ravens are just damn cool too - I love them.

Blessed Samhain Debra and Rare One! :) Wishing happiness for this coming year!

Hello Debra, Let me add Samhain to my Halloween greetings. The raven as a bearer of messages and omens--how like the clock-raven on the Munsters, one of the best parts of the show. I always loved gems like this:

Herman: What time is it?
Raven: At the tone, it will be later than you think.
Herman: I had no idea it was that late.

My favorite holiday for many reasons. Great post - thanks.

A most Blessed and Wondrous Samhain to you, my friend!!!

That girl in the train is my spirit animal.
For real.

Samhain Greetings! Absolutely ... it's deep cultured roots are a treat in itself, without no tricks ... Blessed Be

Blessings on you and yours, Debra. Another turn of the Wheel.
xoxox
e

This history and mythology of the raven is wonderful to learn of. Always a handsome creature. Happy Halloween!

Blessed Samhain to you and your Rare One!!

Happy Halloween and happy Samhain if you prefer!

The ravens of the northern boreal forest here are large, wickedly brilliant in their problem-solving skills and are uber-curious creatures. They also enjoy the fast tempo songs of Alan Jackson, so they know how to have fun too...

Blessed Samhain to you, Deb!

Goddess blessings to you and the rare one..love you both.

Debra, thank you for this post, it sent chills down my spine. I didn't know this about ravens and the Celtic people of which I am almost 100%. The thing that sent a chill down my spine is.. I have a secret. I have been friends with a mother Raven for years, I call her Glawk.. because she often makes that sound when she sees me. She comes when I walk behind the barns because she knows I will throw meat scraps out for her. My uncle was the first person to see this, we were picking apples and she came.... probably thinking I was putting out food.

Blessed Samhain, Debra! I love this day, this time of year. Great post!

I've been seeing the word, "Samhain," but didn't know its meaning. In fact, I'd never heard of it til today. Thanks for explaining.
A meaningful Halloween to you and yours.

And, of course, if the ravens leave the Tower of London then we're screwed. How great it must be thought to be the Ravenmaster!

Quoth the Raven..nevermore..Edgar Allen Poe..I think I have had a thing for ravens ever since I read that as a child..Very informative post..Thanks..

Maybe it's time the Raven's relative, the crow, get its own holiday. We can hold a pagan dance underneath some telephone wires.

Wowza-what a cool and interesting post!! I've always thought they were magical creatures.

What a beautiful, powerful post, Debra! It gave me shivers. There is so much I don't know about Celtic mythology, and I have deep, ancestral Celtic roots. Your Celtic posts are among my favorites of yours. I hope that you and your Rare One had a meaningful Samhain!

Hope your holiday was spectacular! We had very few trick-or-treaters due to the extra cold weather!

I love your Samhain post. Very beautiful and informative.

I just read about Samhain in today's newspaper. I had never heard of it before. I learned you are suppose to leave the light on for the dead. Isn't Raven just an upscale name for a black bird?

Samhain to you, fella! Love the art! (As always)

I love ravens. We have them here in Northern Maine. I found on caught in fence wire at a dump site at our Navy survival school, and freed it and took it back to our barracks. Within hours it would fly to my hand for handouts. After two days I had to let it go because it crapped indiscriminately, kept getting in peoples lockers and aggressively stole food from our mess hall. It sat on top of our barracks for over a day trying to get back in.

They are neat birds and survivors. The Athabaskan Indians of Alaska venerate them as one of their gods. They told their children that if they became lost in the bush, to talk to a raven and it would see them home.

There is a video, 'Make Prayers to the Raven', about Alaskan Athabaskans.

The best to you and your special one
the Ol'Buzzard

Weren't The Ravens important in Native American Lore as well? I find them to be sorta scary birds. Actually I think of many larger birds.

This was really cool to read. I've always had a Raven image as part of our yearly Halloween display. I felt strongly guided to it, now I have insight as to why.

Wow! I've learned something new here and it's fascinating info. Thanks a bunch for the news and the pics! Hugs, RO

Ravens and crows are my favorite birds. They are so beautiful and enigmatic. A (late) blessed Samhain to you and your Rare One.

That woman with the red harp is beautiful.

Ha. Ha. You reminded me of something. In one of the treatment programs I worked in we called ourselves "The Poultry Treatment Program." We had pictures of chickens hung up. Don't know how that got started but it sure gave us a big laugh. I was actually working for The Parole Treatment Program and fortunately clients weren't allowed to come back by our cubicles.

I hope you had a good Samhain. Mine was low-key because of prep for an insanely busy weekend.

I've been MIA for a bit. So, like Rommy above, I hope you had a fantastic Samhain.

i have an old connection to ravens dear Debra
back in my village i used to live quite close to them ,mom was kind of in love with them and would keep them feed whatever she had
where i live right now i have their regular visits which keep me in touch with my past memories belong to them :)
blessings!

I must have missed this one.
Happy Winter now ...
I'm excited for the new season.
I love the changes.
Cheers and boogie boogie.

Beautiful Debra! I know I'm late but I hope you had a blessed Samhain!