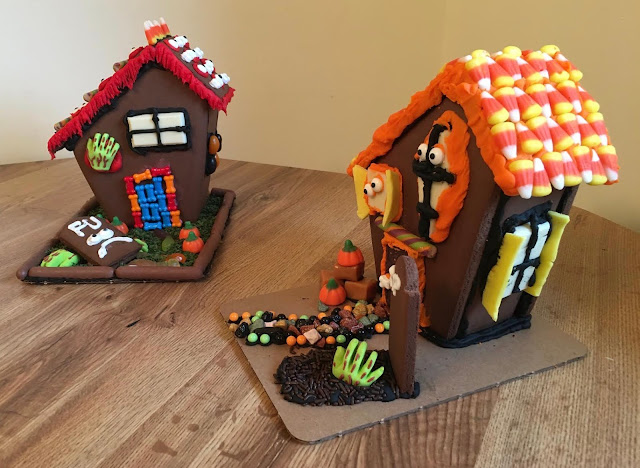 Over the years, My Rare One and I have decorated quite a few Christmas gingerbread houses. But this year, we decided to try our hands at Halloween chocolate cookie houses instead!

I bought two cookie house kits from Michael's. Half-price, yay! (I certainly would NOT have paid the outrageous full original price for them, I must say). We used the black and orange icing that came with the kits to put the rickety little shacks together, but otherwise all the candies and other decorations were bought separately. (The ones provided by the kits were pretty crappy).

My Rare One chose largely orange icing for her tiny house. I love her little pumpkins on caramel hay bales and the walkway full of chocolate rocks. She also did an awesome job on the gravestone, grave dirt and zombie candy hand. 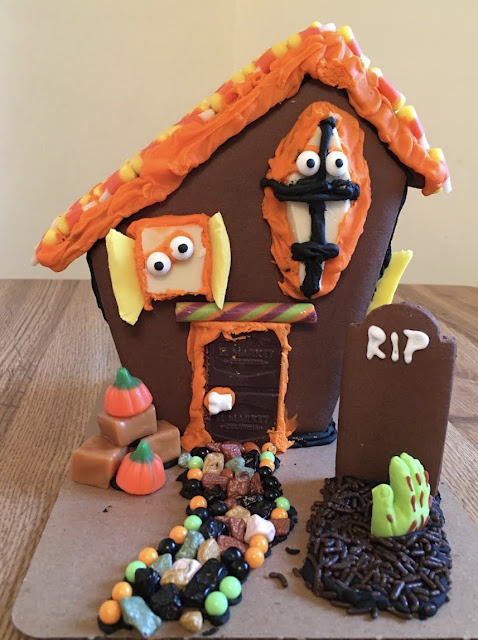 Her candy corn shingling job was outstanding as well, in my opinion. We had lots of zombie candy hands so she put a couple more crawling up the back of the house. (I got those half-price at Michael's too). 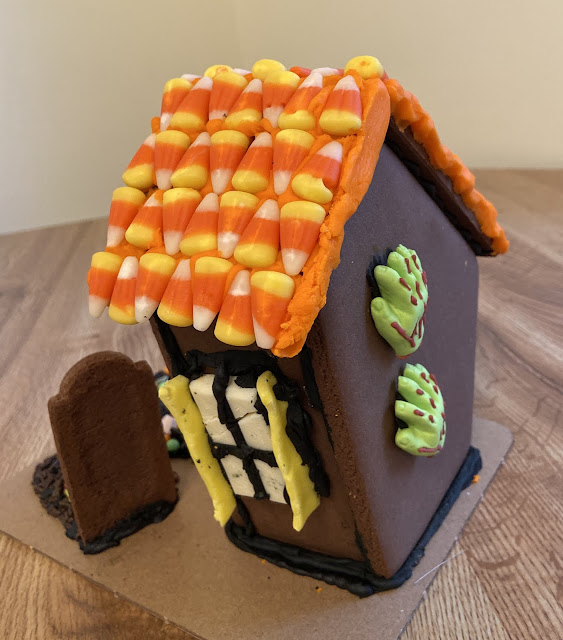 I used red icing along my roof line to mimic dripping blood. And I owe a shout-out of thanks to my sister who gave me a package of candy googly eyes. The red icing in which they're set is supposed to represent red-rimmed bloodshot eyeballs.

My tombstone fell over on a pair of zombie hands. There's two or three hard-to-see gummy worms crawling out of the grave too. And please note: my rather shakily piped lettering spells out FU, not PU. Although either is appropriate, I guess! 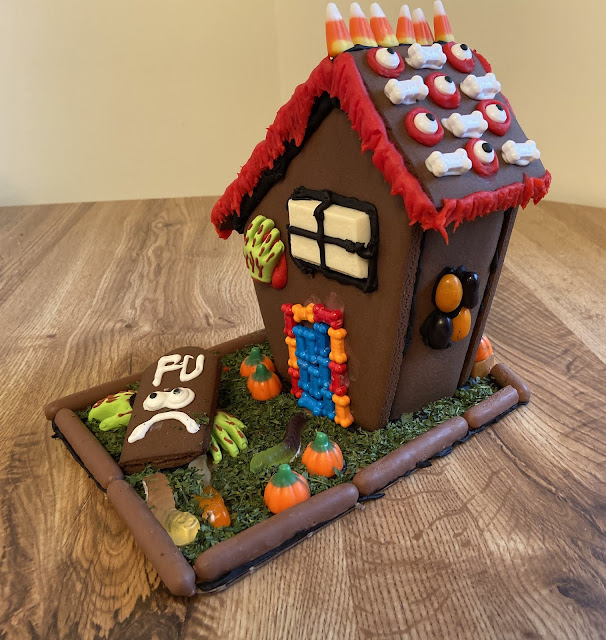 Cadbury chocolate wafer fingers form the fence which keeps in my shack's green grass (parsley). And I went a bit crazy with candy corns on the back and as roof finials. 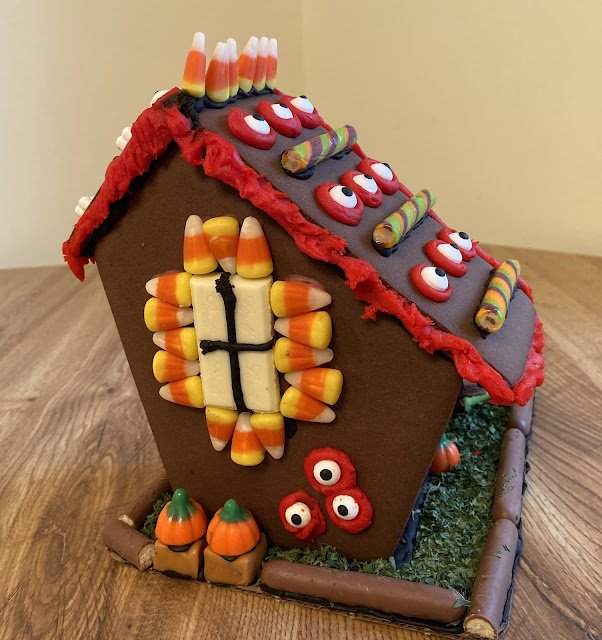 No, we did not eat a SINGLE candy while making these houses! And we will not eat any between now and Halloween. Our chocolate cookie houses will sit out on My Rare One's front step on Halloween night this year instead of carved pumpkins. Then they will mysteriously disappear, we know not where. 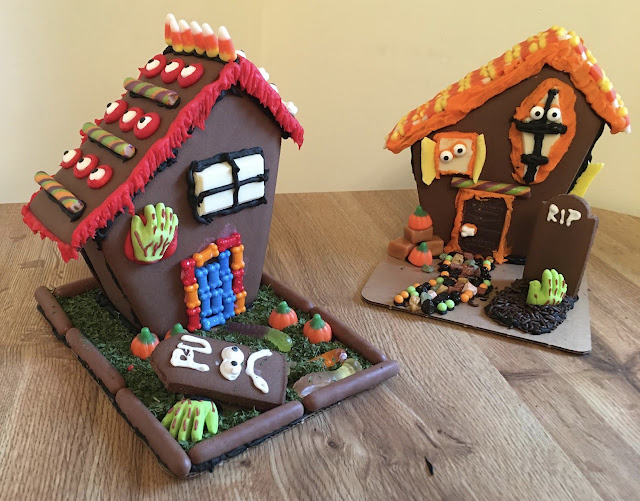 (P.S. -- If you'd like to see our efforts at Christmas gingerbread houses over the years, just click on the label "Gingerbread Houses" at the end of this post or over on the right sidebar and then scroll through the posts!)

[All photos taken by Debra She Who Seeks and My Rare One, October 2019]

WOW! I'm coming to your house the next time I have the munchies! lol Those houses look amazing.

I love these!!! Probably a good thing we can’t buy those kits here. I’d buy a dozen and eat six while assembling the others. Did you know Kit Kat bars now also come in white and dark chocolate, too. Great building material. I’m drooling!

The two houses will bring everyone happiness. Have a nice weekend.

They are amazing! What a great job you guys have done, we make them here as well but never thought of making them chocolate,, what a great idea! You have given me a great idea for Gracie and Teagan, I’ll tell Gracie and show her your houses when she comes here tomorrow, she will love them, those hands! She will love those lol, this was perfect! Happy Halloween to you both!

Those are sooooo cute. Do you mind if I share them on FB with my friends. No one I know has ever tried a Halloween House.

Wow! You put in a lot of effort! They both look great.

I have never seen a Halloween Candy House before and I love them.
Major props for not eating any of your building supplies whilst creating them!

Those are simply wonderful. Why I've never thought of it is well beyond me!

This is fantastic!
I once ate part of gingerbread house and swore them off, but these are tempting!

Those are so cool Debra! You two did a great job on those! I'd love to do a Halloween house one of these days! I would totally be snacking on that candy corn roof!! :)

I'm so very impressed by your handy work; you both did an outstanding job!!

OMG!! Those are so CUTE!!! I haven't been to Michael's in so long. I usually get everything I need for crafts online. I really need to get out more.

Putting them on the front porch? The first kid who arrives might decide on an extra treat.

What fun! Sorry I didn't see this kit when I was at Michael's not too long ago. Heading over now to look at your Christmas houses.

I would have expected a tiny blop of chocolate in front of your Halloween house depicting HRH's poop, Debs :)

That looks like fun! Great decorations for the trick-or-treaters... even if they do mysteriously disappear.

Very cool! Good work, both of you!
Happy haunting!

These must have been really fun to make! Love that roof shingled in eyeballs and bones. Good use of candy corn by Your Rare One too!

How very cute they both are! And, "atta girls" for not indulging in the decorating candies. I fear there might have been few pieces of candy corn to use for decorating had I attempted one such!

Oh cute - what great houses. I love the use of candy corn and Zombie hands.

Hmm, what does it say about me that I immediately read the tombstone as "FU"?

Awesome!!! What a great idea!

It's no TRICK at all to mail us one of your scrumptious looking houses and it will be a TREAT we will long remember.

(Just kidding, but they DO look delicious.)

These are fantastic! I am sure there were a lot of laughs making them! This is a great way to feel like a kid again. The candy corn roof is amazing and the zombie motif is super fun!

Wonderful artwork. They also look delicious. It sounds like you had a great time creating them. I would have eaten some candy if I had assembled them.

Both cookie houses look great and I bet that they taste delicious too - well done Debra and your Rare one.

Parsley!? Why did you have to go ahead and render your chocolate house healthy? Are you trying to ruin Halloween??

talent abounds in canada! but they would be gone if they were at my house...OM NOM NOM NOM!

Oh how I wish there was something like that here!

Well done and well done. I wonder how well they will survive trick or treaters.

I'd be hard pressed to wait til Halloween...
Love your gingerbread houses! They are awesome!

These are so much more fun than Christmas gingerbread houses. Now way I could wait until Halloween to eat them! You were wise not to eat any of the candies. Just one and it would be all over for me!

I never thought of gingerbread as a creative outlet, but these are so much fun, I might give it a try. I went back and looked at the old posts, and loved all the gingerbread cartoons.
--Jim

haha
okay hide it from me or i am coming to eat them all dear Debra :)))

i LOVED your carnation so much
and i am proud of you to keep control and not having single bite during art work ,now that is called PATIENCE !

Just when I got to your paragraph of denial, I was wondering how many of those you ate. Great minds! They are adorable. What an imagination you two have. I would’ve had to eat something anyway. It would not have been the candy corn. Have a great weekend.

Pass the plate and spoon.
JP

The sad face of your tombstone is too cute. And so is the way the eyeballs of your Rare One's window are staring at the graveyard next door. What fun!

Those are great. Mine would just be a lump of chocolate because I am not good at doing anything artsy.

You two are amazing Deb! These are so much fun! I love them! Well done to the both of you! This is something I have never done! I think I should! Big Hugs!

I watch gingerbread cooking contests every year, and have been fascinated at what people come up with, but I've never heard of or seen any cookie houses, and yours look like such fun and totally yummy! Happy Sunday! RO

Lovely chocolate houses oh how I wish that we lived nearer and yet that would be dangerous because I'm a severe chocoholic you know. Thank you for displaying your skills xx

That candy corn roof is so clever, love it. If I'd been creating that I would have eaten them all before they made it onto the house.

Oh these ae marvelous!
thank you for sharing such! How jolly !

very crafty! I didn't know there were Halloween gingerbread houses. Just as much or more candy than Christmas I think.

They looks mniammy and cute <3 Regards:**

I'll have to say that you two sure know how to have fun! I love those spookie cookie houses!

I love these little houses. Always wanted to make one, but never found the time.

these are sooo cool..going to try my hand at these with the gg's for christmas

Those turned out so cute!